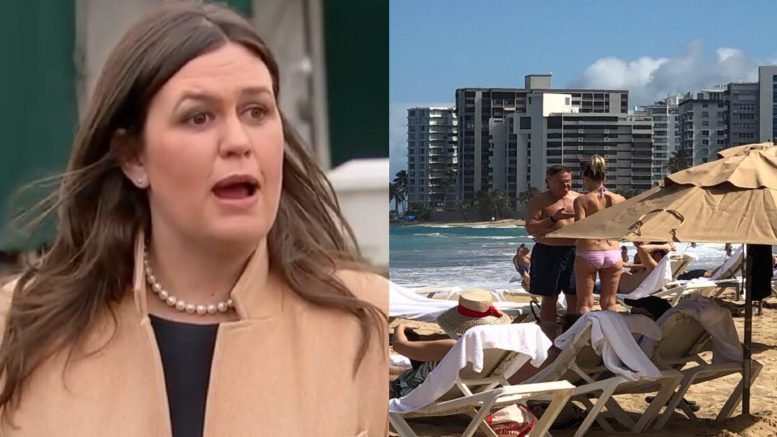 With no end in sight, the shutdown is going on day 22, and the President is waiting for Democrats to come back to Washington D.C. to make a deal on border security and end the shutdown. (Video Below)

The press secretary posted a link that exposes 30 Democratic members of Congress who traveled to Puerto Rico this weekend, with their families and lobbyists, for a winter retreat where they also planned to see a special performance of the hit Broadway show “Hamilton.”

According to Fox News, those attending the Congressional Hispanic Caucus BOLD PAC gathering in San Juan also planned to meet Saturday with Puerto Rican officials to discuss ongoing cleanup efforts from Hurricane Maria, according to a report.

The junket is taking place at a seaside resort where rooms run around $429 a night. The participants paid for the “Hamilton” tickets with their own funds, the Washington Examiner reported. (Video Below)

Press Secretary Sanders fed up, wrote on Twitter and exposed their true colors, “Democrats in Congress are so alarmed about federal workers not getting paid they’re partying on the beach instead of negotiating a compromise to reopen the government and secure the border.”

President Trump also said on Sunday, “I’m in the White House, waiting. The Democrats are everywhere but Washington as people await their pay. They are having fun and not even talking!”

Further, Sen. Bob Menendez, (D-NJ), was spotted on the beach resort in the picture below on Saturday in Puerto Rico. (Video Below)

Democrats in Congress are so alarmed about federal workers not getting paid they’re partying on the beach instead of negotiating a compromise to reopen the government and secure the borderhttps://t.co/zpJypJ2Slq

Spotted: Sen. Bob Menendez on the beach at a resort in Puerto Rico on Day 22 of the partial government shutdown. Reports say dozens of Dems are in PR for the CHC BOLD PAC winter retreat — including meetings on Maria cleanup, and a party with PR’s “Hamilton” cast. pic.twitter.com/6FaBYKPo4L