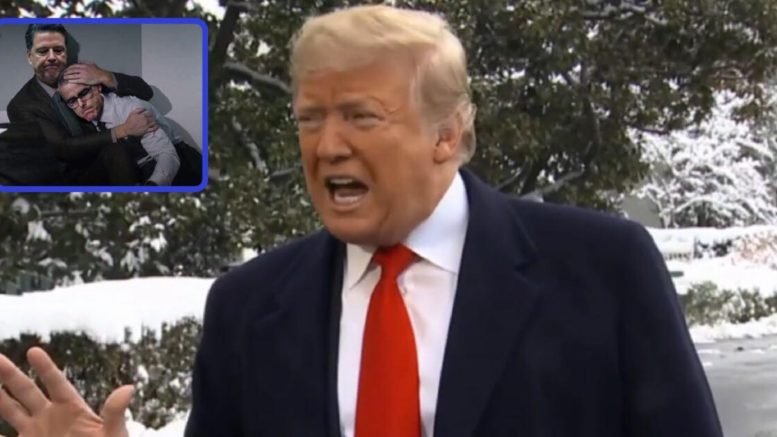 President Trump is headed to New Orleans where he will be joining farmers for the American Farm Bureau Federation’s 100th annual convention and will be giving a speech.

Upon heading to the convention, the President took questions from the press where he answered a number of subjects related to border security, Democrats, and former FBI agents. (Video Below)

President Trump while speaking to reporters, pushed back at Democrats skipping town for the weekend while he was there working and waiting to make a deal for border security.

“I was here all weekend. A lot of the Democrats were in Puerto Rico celebrating something… I don’t know, maybe they’re celebrating the shutdown. We have a very big humanitarian crisis on the border. Everybody knows it. They know it, and many of them are saying we agree with you. Many are calling and many of them are breaking. The Republicans are rock-solid. We’ve got to take care of our borders.” President Trump explained.

“I will tell you this: we have a priority, it’s the safety of our nation. The southern border has been horrible for decades, and it’s now because the success of our country, it’s now at a level that we cannot put up with.” The President added, “The Democrats have to do something. We need their votes, otherwise we can’t solve it.”

Trump called out Democrats who voted for border security many times in the past now refuse to because “they are going to loose in the 2020 election.” (Video Below)

Next, President Trump tore into fired FBI Director James Comey and his deputies after The New York Times claimed the bureau launched an inquiry into whether Trump was actually working on behalf of Russia in the wake of Comey’s ouster.

The President called Comey a “bad cop” and his former bureau allies “known scoundrels.” (Video Below)

President Trump explained, “The people that started that investigation are McCabe, who is a proven liar and was fired from the FBI, Lisa page who was forced to leave the FBI and her lover Peter Strozk, who we got their text messages, and what they said in those text messages was shocking! When you talk about bias and also Comey, and I guess they started it because I fired Comey, which was a great thing I did for our country. So, the people doing that investigation were people that were caught are known scoundrels.”

He continued, “I guess you could say they are dirty cops. I have never seen a turnaround in a bureau or agency like I have with the FBI they are so embarrassed –12 people have now been terminated and others are going to go. When you say I should have confidence in the FBI–when I see [Bruce] Ohr, and others like Lisa [Page] and her lover [Peter Strzok], and you see what they said about me, let me tell you something, when people see that, you have an angry country.”

He added, “What happened with the FBI … I have done a great service for our country when I fired James Comey. He was a bad cop and a dirty cop and he really lied. He really lied. And, all you have to do is look at the Crooked Hillary Clinton investigation when they brought her under July 4th weekend. They didn’t swear her in, they didn’t do any tapes, they didn’t do anything. They just let her go, and she mostly said ‘I don’t know,’ she didn’t know anything.”

(Related Article: In A Fierce Statement, Trump Reacts To FBI’s Investigation Over Comey’s Firing: ‘He Was A Crooked Cop’

“Either he’s a bad liar or he is grossly incompetent,” Trump said of James Comey.