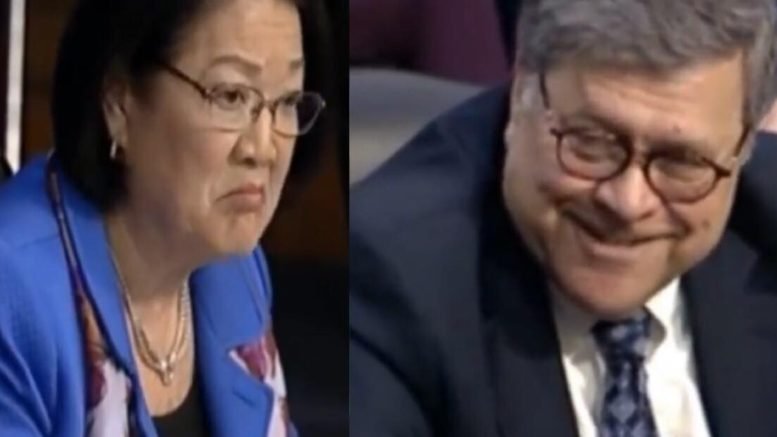 Barr, 68, was nominated by the President to lead the Justice Department in December after former Attorney General Jeff Sessions resigned at Trump’s request in November. (Video Below)

During the hearing on Tuesday, William Barr flustered Senator Mazi Hirono (D-HI) after he told her he won’t recuse himself from the Mueller investigation. He punted her idea back to Honolulu.

She pulled out her bias political card, was already on the rebound, and you could just see her disgust in even having to participate in the hearing. She was huffing and puffing while “resist” was written on her forehead.

She brought up Barr’s memo that he wrote, where she cited parts of it, and then said that upon reading the context it was not enough to trust him.

“Why won’t you follow Jeff Sessions’ lead and take and follow –the critical portion– follow the advice of the department’s ethics officials?” Hirono aggravatedly asked. (Video Below)

Hirono interrupted Barr and said, “You have…excuse me, repeated that answer several times, however, I think we all acknowledge that Jeff Sessions, possibly, didn’t want to recuse himself, but he did. And so, you have it in your power to follow the ethics advice of your own department and you’re telling us you’re going to… so that is the bottom line.”

Barr shot back after her failed attempted and could read right through her. “No, Senator. I think Jeff Sessions recused himself because of a different provision, which was the political conflict provision.” Barr added, “He played a role in the campaign.” (Video Below)

Frustrated, Hirono responded, “In the context of all the things you have done basically to get the attention of President Trump to nominate you, I would say there’s a political context to what your decision should be also.”

Next, she asked if Barr would allow the Mueller investigation to go forward unimpeded– based off of his 19-page memo.

“You have said that you will allow Mueller to complete his work, although you know, I do want to ask you a very specifically because you did write that 19-page memo relating to the obstruction of justice. Would you allow the Mueller investigation, with regard to obstruction of justice to also go forward unimpeded by you?”

“I don’t know whether there’s an investigation of obstruction of justice.” He shot back.

Barr reading right through her again replied, “Okay, but you have to remember my memo was on a specific statute and a specific theory that I was concerned about. I have no basis for suspecting at this point that that is in play at all.” (Video Below)

Hirono tried again by pointing out that she had said “let’s assume that in fact, obstruction of justice is part the Muller investigation.

Barr explained, “When I say theory, I mean what I was addressing whether the removal of Comey in and of itself would be obstruction, under a particular state.”

She rudely interrupted Barr, and smugly said that she only had 4 minutes and had to move on. Then, she babbled on about Trump and his foundation and business associates, and whether any of the investigations surrounding the President were lawful.

Next, she suggested that when Mueller releases his findings that Barr would not disclose the information, and he told her that he doesn’t know at the end of the day what would be releasable yet. Clearly he doesn’t know what Mueller’s writing or has found.

“What are you going to be transparent about,” Hirono asked. (Video Below)

“As the rule stands now, people should be aware that the rules, I think, say that the special counsel will prepare a summary report on any prosecutive or declination decisions, and that shall confidential and shall be treated as any other declination, or prosecutive material, within the department. In addition, the Attorney General is responsible for notifying and reporting certain information upon the conclusion of the investigation.” Barr added that “he has to wait to talk to Rod Rosenstein to see what he has discussed with Mueller.”

“My goal and intent is to get out as much information as I can consistent with the regulation” He explained.