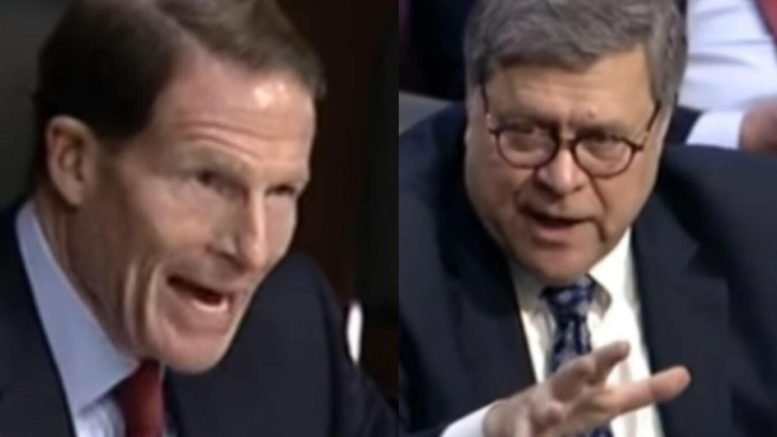 During the hearing confirmation, Senator Richard Blumenthal (D-CT) couldn’t help himself from showing his anti-Trump bias. It was written clearly all over his forehead.

As Blumenthal sat next to Senator Mazi Hirono, (D-HI) the pair were not interested in what William Barr had to say. They have only one objective: how can they can destroy a sitting President and take him down?

Blumenthal, single handedly zeroed in and asked Barr during the hearing about indicting a sitting President. (Video Below)

Looking distressed, Blumenthal asked William Barr, “The question is whether the President could be prosecuted while in office… I happen to believe that he could be, even if the trial were postponed until he is out of office, but because the statute of limitations might run for any other number of reasons, a prosecution would be appropriate. Would you agree?”

Barr immediately responded, “You know for 40 years the position of the Executive Branch has been… you can’t indict a sitting President.”

Trump hater Blumenthal whined, “Well, it’s the tradition based on a couple of OLC opinions, but now it is potentially an imminent possibility, and I’m asking you for your opinion, now if possible, but if not now, perhaps at some point.” (Video Below)

“Are you asking me if I would change that policy?” Barr asked.

Sitting on the edge of his seat hoping William Barr would jump up and down and give Blumenthal the answer he wanted, Barr instead read through the lines and crushed his dreams.

“You know, I actually haven’t read those opinions in a long time, but I see no reason to change them.” Barr respectfully replied.