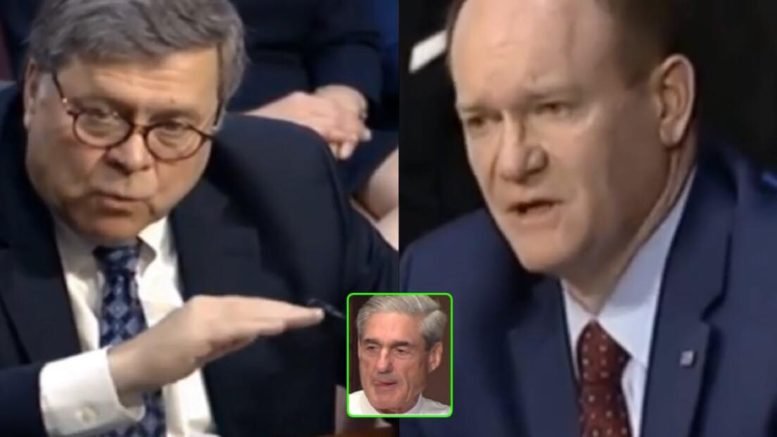 Coons asked Barr “If you learned the White House was attempting to interfere, would you report that information to the special counsel and to Congress?”

“If I thought something improper was being done, then I would deal with it as attorney general,” Barr said.

However, when asked if he would stop the special counsel or interfere, Barr said, “To overrule Muller, someone would have to deter the Attorney General or the acting Attorney General would have to determine, after giving Mueller’s position great weight, that it was so unwarranted under established policies that is should not be done.” (Video Below)

“So, that’s the standard I would apply, but I’m not gonna surrender!” Barr declared.

He added, “The regulations give some responsibility to the Attorney General to have this sort of general supervision, not day-to-day supervision, but sort of be there in case something really transcends the established policies.”

“I’m not surrendering that responsibility. I’m not pledging it away.” Barr doubled down. (Video Below)

Coons went on about Barr’s memo he wrote in last summer and asked if Barr would rely on his theory that Mueller should not be permitted to demand the President to submit to an interrogation about alleged obstruction or if the special counsel wanted to subpoena the President’s testimony.

“If there was a factual basis for doing it, and I couldn’t say it violated established policies, then I wouldn’t interfere. But, I don’t know the what the facts are.” He added.

Coons carried on about the special counsel, and hoped that Barr would trust Robert Mueller, despite their friendship and that he wouldn’t interfere.

What are the Democrats so afraid of? Lisa Page and Peter Strzok’s “insurance policy” coming to an end?

Further, Barr announced that he ‘will not be bullied’ into doing anything that is wrong. (Second video)

Barr says he ‘will not be bullied’ into doing anything that is wrong: