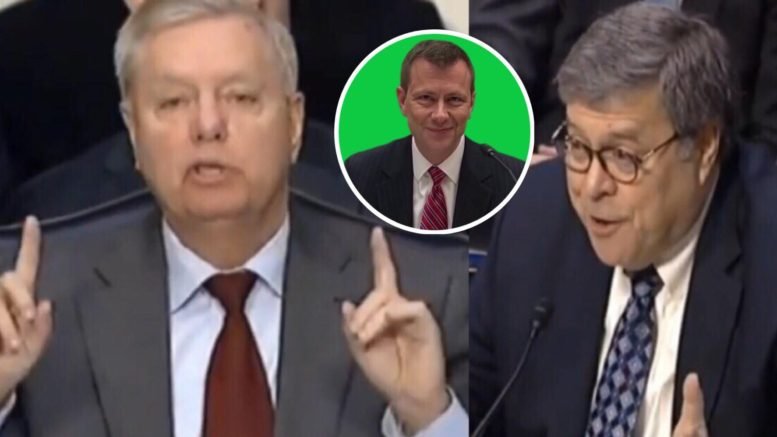 William Barr pledged during Tuesday’s confirmation hearing to not interfere with Special Counsel Robert Mueller’s Russia investigation, while adding that the country needs a credible resolution of these issues.

“I will follow the Special Counsel regulations scrupulously and in good faith, and on my watch, Bob will be allowed to complete his work,” Barr said.

Committee Chairman Lindsey Graham (R-SC) kicked off Tuesday’s confirmation hearing for Barr by saying the Justice Department needs a new leader to “right the ship over there.”

Graham said, “We’ve got a lot of problems at the Department of Justice. Morale is low and we need to change that. I look forward to this hearing. You will be challenged. You should be challenged.” (Video Below)

Graham questioning Barr asked, “Are you familiar with the January 11th New York Times article about FBI opened inquiry that Trump was secretly working on behalf of Russians?”

Graham inquired, “Would you promise me and this committee to look into this and tell us whether or not in the appropriate way the counterintelligence investigation was opened up by somebody at the FBI/ DOJ against President Trump?” (Video Below)

Barr responded, “Yes, Mr. Chairman. I think there are a number of investigations, as I understand it going on in the department.”

Graham quickly shot back, “Have you ever heard of such a thing in all the time you’ve been associated with the DOJ?”

Barr replied, “I have never heard of that.”

Graham asked, “Are there rules about how you can do counterintelligence investigations?”

Barr said, “I believe there are, Mr. Chairman.”

“So, if you want to open one up against the President, are there any checks and balances?” Graham wondered.

Barr responded, “Not outside the FBI.”

Graham said, “Well, we need to look at that.” Further he asked, “In terms of people who are actually enforcing the law, don’t we want to make sure they don’t have an agenda?”

“Do you know a Lisa Page or Peter Strzok?” Graham then asked.

“But, do you know them personally?” Graham asked.

“This is a text message, Aug. 8th, a text message,” Graham said. “Trump’s not ever going to become President, right? Right. Strzok responded, no, no, he’s not. We’ll stop him. Strozk was in charge of the Clinton email investigation and Ms. Page worked with the DOJ. August 15, 2016, I want to believe that path you through out for consideration and Andy’s office, that there’s no way he gets elected, but I’m afraid we can’t take that risk. It’s like an insurance policy in the unlikely event you die before 40.”

Graham continued, “March 4th, 2016 Page destruct. God Trump is a loathsome human being. October the 20th, 2016, Trump is an effing idiot, is unable to provide a coherent answer.”

“To all those who enforce the law, you can have any opinion of us that you like, but you’re supposed to do your job without an agenda!” Graham announced.

“Do you promise me as Attorney General if you get this job, to look in to see what happened in 2016?” Graham asked to Barr.

“How do these statements sit with you?” Graham asked of Barr.

“I was shocked when I saw them!” Barr admitted.

“Okay, please get to the bottom of it. I promise you we will protect the investigation, but we’re relying on you to clean this place up!” Graham declared.