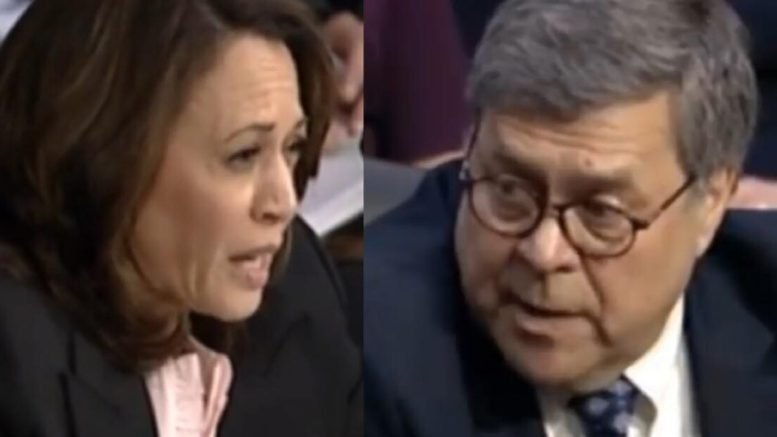 Grandstanding from Democrats seems to be the name of the game during the confirmation hearing for William Barr, but more importantly the Dems fear Mueller’s witch hunt being shut down.

Sen. Kamala Harris (D-CA) tried her hand with William Barr by suggesting he recuse himself from the Mueller investigation after Sen. Mazi Hirono (D-HI) struck out. This is their only tactic they are playing to “determine their vote” for Barr.

Harris was ultimately shut down and left flustered. (Video Below)

Harris began, “Earlier today, Sen. Leahy asked whether you would follow the recommendation of career Department of Justice ethics officials on whether you should recuse yourself from the Mueller investigation. You said quote ‘I will see the advice of the career ethics personnel, but under the regulations, I make the decisions as the head of the agency as to my own recusal.'”

She continued, “You also said to Sen. Klobuchar that you do not want to quote abdicate your duties since recusal decision would be yours, so my question is would it be appropriate to go against the advice of career ethics officials that have recommended recusal, and can you give an example of under what situation or scenario you would go against their recommendation that you recuse yourself?”

Barr responded, “Well, they’re different. There are different kinds of recusals. Some are mandated for for example if you have a financial interest, but there are others that are judgement calls.” (Video Below)

Kamala jumped on Barr’s response, and then she played hypotheticals.

“Let’s imagine it’s a judgement call and the judgement by the career ethics officials in the agency or that you recuse yourself. Under what scenario would you not follow their recommendation?” She asked nodding her head becoming flustered.

They went back and forth and ultimately Barr explained it’s a judgement call to recuse himself, and further it’s the job of the Attorney General to make the decision.

She tried again to pressure Barr to take advice from the DOJ ethics officials and asked why he wouldn’t follow their advice. He shot her down explaining that if he didn’t agree, then he wouldn’t recuse.