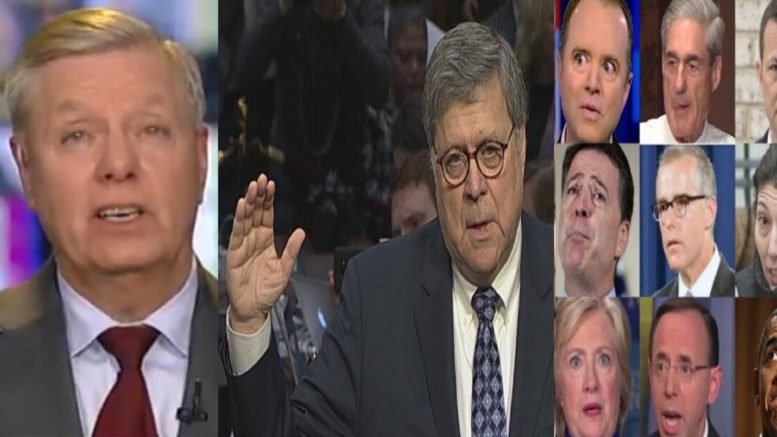 Sen. Lindsey Graham (R-SC) joined Sean Hannity on Fox News Tuesday night where he weighed in on the the confirmation of President Trump’s nominee pick for Attorney General, William Barr.

Further, Graham addressed whether he believes Barr will address the deep state and their corruption. (Video Below)

During the interview, Sen. Lindsey Graham said that he’s seen no evidence of Russian-collusion but evidence of corruption at the DOJ and FBI.

“Will Bill Barr do the things that Jeff Sessions did not do? That is the deep state, Hillary Clinton, and other things?” Hannity asked.

“I believe so. I’ve seen no evidence of collusion between the Trump campaign and the Russians, but I’ve seen a lot of corruption at the Department of Justice and the FBI.” Sen. Lindsey Graham expressed.

“I have every confidence that Mr. Barr is gonna ask questions. How can you certify to the FISA court on 4 separate occasions that you have enough evidence to get a warrant against an American citizen when the evidence, the dossier, is unverified to this day?” Graham asked. (Video Below)

Graham then explained that he hopes William Barr if elected to Attorney General, will go back and find out why Hillary Clinton got away with deleting over 30 thousand emails. (Video Below)

“I want him to do more than what Mr. Horowitz did, explain to the country how it got so bad. I want him to tell us what happened with the FISA warrant application process; how could it get so off base.” Graham said.

Further he noted that if there was a counterintelligence investigation of President Trump, he wants to know how it started and who started it.

He also pointed out that he thinks President Trump picked the right guy to do it.

Hannity and Graham both agreed that Russian lies were used to purposely rig an election and call for an investigation paid for by Hillary and the DNC, including a leak strategy to the media and an “insurance policy” if it failed. Which is Robert Mueller’s witch hunt.