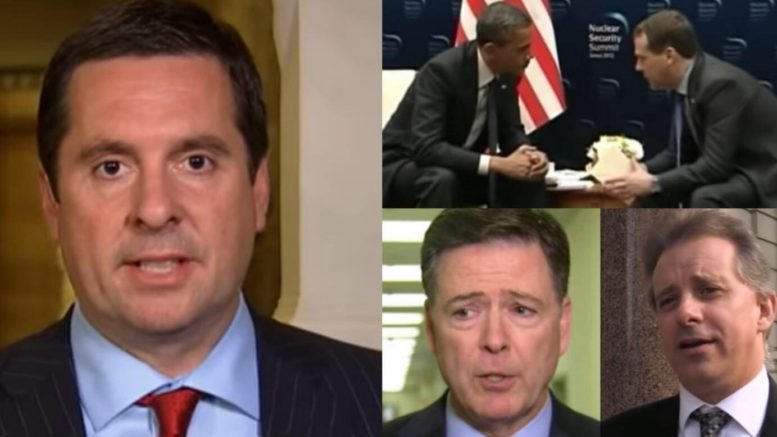 Chairman of the House Permanent Select Committee on Intelligence and a member of the Ways and Means Committee, Rep. Devin Nunes, (R-CA) joined Sean Hannity on Fox News Wednesday night where he weighed in on the anti-Trump bias.

Nunes is fighting for the truth for the American people, and he blasted the latest reports exposing the hypocrisy and bias among FBI leadership. (Video Below)

During the beginning of the interview, Sean Hannity explained that former top FBI lawyer James Baker is a subject of a criminal media investigation because of leaks to the media. Further he revealed that a counterintellege bombshell shows FBI leaders “had no real evidence against the Trump team,” but they launched an investigation anyway, following the Comey firing.

Hannity told Nunes that it appears there was a “revenge” investigation set up, and then they launched the “Trump-Russia collusion” investigation, but the former FBI agents who were fired, didn’t have any real substance.

Nunes said to Hannity, “Sean, let’s think about it a different way. We have these supposed Russia hawks sitting over at the counterintelligence division at the FBI and DOJ. Where were they in 2012 when Barack Obama got caught on hot mic telling the Russian leader at the time that he needed more time to wait until after the election?” He added, “It looks like that was trying to work with Russians.”

“Where were the Ukrainians when they were begging the United States for weapons? The Congress was trying to give weapons to the Ukrainians after the Russians had invaded and annexed Crimea?” Nunes pointed out the double standard, “Nobody went to investigate the Obama White House or President Obama.” (Video Below)

Nunes explained there is no evidence of records or phones calls with President Trump of wrongdoing, yet the deep state pursued an investigation.

Related Article: In A Fierce Statement, Trump Reacts To FBI’s Investigation Over Comey’s Firing: ‘He Was A Crooked Cop’)

Nunes recalled that he and his team set up a task force last summer to conduct interviews. “What supposedly is leaking now are pieces of these interviews that Chairman Gowdy and Chairman Goodlatte had asked for the FBI and DOJ to release them. They sat on them, and now what I think is happening is people are selectively leaking pieces of this.”

The letter can be read here: Devin Nunes Sets The Entire Swamp On Fire With A Ruthless New Ultimatum)

He added that it’s very alarming and concerning if it’s true that the deep state was trying to get Christopher Steele to come back, after he was terminated. However, it will lead Nunes to push forward and release the transcripts from the interviews. (Video Below)

(Related Article: IT’S ON: The Swamp Will Have Terrifying Nightmares After What Nunes Just Announced)