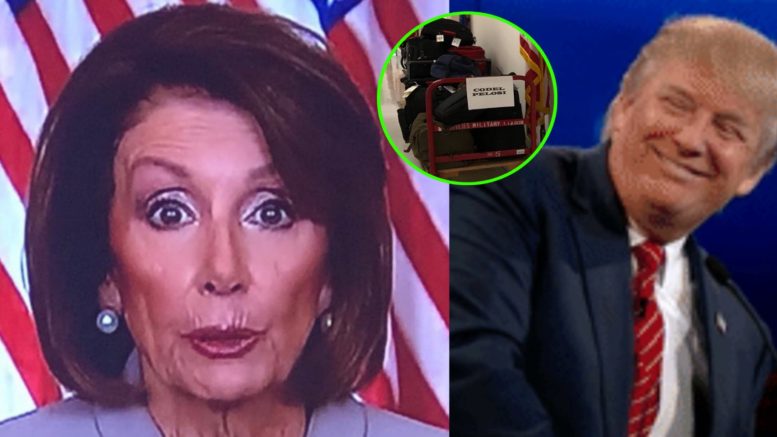 It has been an interesting week in Washington, to say the least.

Trump stunned Pelosi right as she was set to take off for a planned trip abroad in regards to foreign relations, and denied her aircraft to get there. The President then issued a letter, that appeared to mock the one Pelosi issued when she attempted to postpone the SOTU.

In his letter, that has since gone viral, Trump told Pelosi she was more than welcome to fly commercial if she saw fit.

The House Speaker, however, must have decided not to opt for the President’s recommended Plan B, as her returned luggage was spotted in the hallways of Congress just hours after the news spread.

Brent Scher, a writer for Free Beacon, tweeted out an image of Pelosi’s returned luggage that now sits quietly, and safely in the halls of US Congress.

Related Article: Trump Issues The Ultimate Payback To Pelosi After She Dis-Invites Him To SOTU Address; Denies Her Foreign Trip

Brent captioned the tweeted image, that can be seen below, with, “BREAKING: Full cart of luggage has been returned to the halls of congress after [President Trump] cancels [Speaker Pelosi]’s foreign trip.”

BREAKING: Full cart of luggage has been returned to the halls of congress after @realDonaldTrump cancels @SpeakerPelosi's foreign triphttps://t.co/8yd3DrLsza pic.twitter.com/uSPudMBs0e