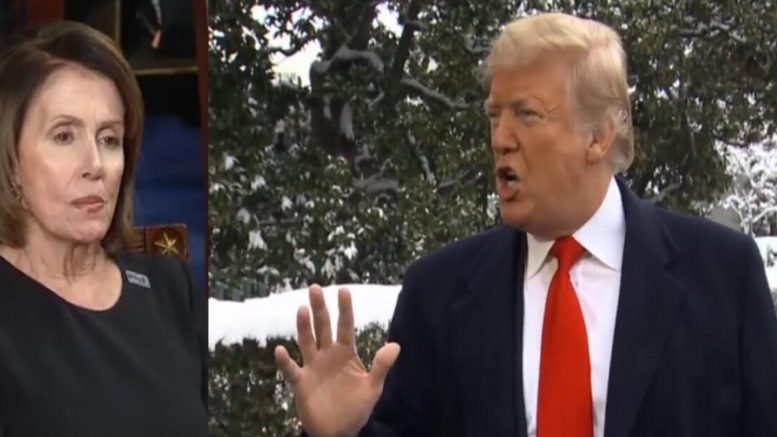 President Trump on Thursday savagely pulled the plug and denied a military aircraft to Speaker Nancy Pelosi (D-CA) for a foreign trip just minutes before Democrats were set to depart.

This comes after her move to postpone the President’s State of the Union Address. (Video Below)

Amid the partial government shutdown, President Trump wrote a letter to Pelosi and said her trip has been “postponed.” Press Secretary Sarah Huckabee Sanders posted the letter on Twitter.

“Due to the Shutdown, I am sorry to inform you that your trip to Brussels, Egypt, and Afghanistan has been postponed. We will reschedule this seven-day excursion when the Shutdown is over. In light of the 800,000 great American workers not receiving pay, I am sure you would agree that postponing this public relations event is totally appropriate,” President Trump wrote.

“I also feel that, during this period, it would be better if you were in Washington negotiating with me and joining the Strong Border Security movement to end the Shutdown. Obviously, if you would like to make your journey by flying commercial, that would certainly be your prerogative.” He said.

“I look forward to seeing you soon and even more forward to watching our open and dangerous open Southern Border, finally receive the attention, funding, and security it so desperately deserves.” He added. (Video Below)

“If she had gone on this trip she would have guaranteed that 800,000 federal workers would not receive their second paycheck because she would not have been here to negotiate any kind of deal,” a senior White House official said.

The President’s move to cancel Pelosi’s trip came in response to the House speaker’s request to delay his annual State of the Union address. The President has been slated to deliver his message to a Joint Session of Congress on Jan. 29, but Pelosi urged the president to delay his delivery until the government re-opens, or deliver the address in writing. (Video Below)

.@SpeakerPelosi CoDel was scheduled to leave at 3pm, when @realDonaldTrump informed her that it was postponed.

According to the @WhiteHouse , @SpeakerPelosi is free to go on the CoDel, but she will have to fly commercial. No military transportation.

@johnrobertsFox The reason given for postponing the CoDel (which go through the State Department) is because the trip would have @SpeakerPelosi out of the country Tuesday at midnight…..when the next government pay period happens…

@PressSec says @SpeakerPelosi can still travel by commercial. Here’s a pic of the bus that was going to take lawmakers to Andrews for departure: pic.twitter.com/zDS7znlZ6Q

Members are sitting on the USAF bus on CapHill they wait to see if they are departing on overseas trip Trump canceled.

Fox is told there are furious calls going back and forth now between the Hill, State, Pentagon and White House.

Trump makes no mention of State of the Union in his message to Pelosi. But in sign off says “I look forward to seeing you soon.”

Today, I wrote to @realDonaldTrump recommending that we delay the State of the Union until after government re-opens, as the @SecretService, the lead federal agency for #SOTU security, faces its 26th day without funding. https://t.co/K2oL8WGvqo pic.twitter.com/g3fIlxDbbK