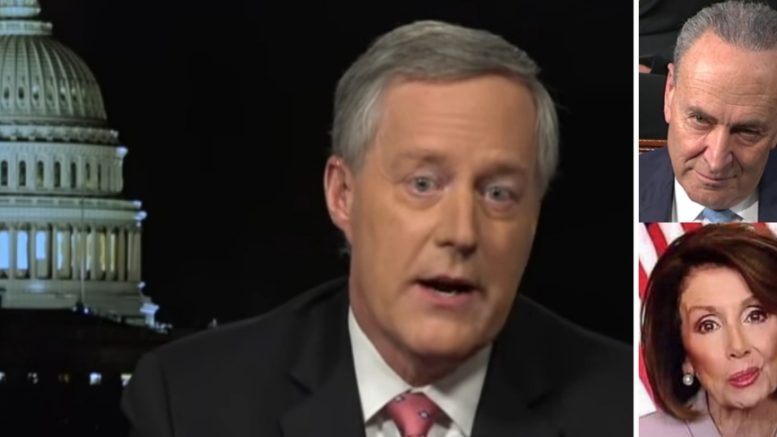 On Saturday, President Trump couldn’t get one word out during his ‘special announcement’ to the nation before Democrats rejected his generous proposal to end the shutdown.

Trump outlined a bi-partisan, common sense plan, that had the best interest of DACA in mind, as well as security proposals & ideas that are strongly supported by Democrats. But of course, it still wasn’t enough to sway House Speaker Nancy Pelosi, Senate Minority Leader Chuck Schumer and other Democrats into ending the standoff.

Republican Congressman and Chairman of the Freedom Caucus, Mark Meadows, is tired of games Democrats are playing with border security and the safety of Americans on the line.

He is ready for President Trump to take matters into his own hands to finally seal the border with a wall.

The President has said that he could always declare a National Emergency if it comes down to bypassing obstructionist Democrats to get the wall, but Republican critics caution that method.

Mark Meadows, however, laid out a pathway on Sunday that could bypass both ‘unreasonable Democrats’ and the National Emergency option to see the wall through. See Below

Meadows said, “Democrats have made it extremely clear this shutdown is all about opposing Trump for them. It’s time to pursue other options. 10 USC 274/284 would allow for fence construction without national emergency. Protect our communities, build the wall, and forget unreasonable Democrats.”

As per Cornell Law, 10 U.S. Code § 274 states,  “The Secretary of Defense may, in accordance with other applicable law, make Department of Defense personnel available for the maintenance of equipment for Federal, State and local civilian law enforcement officials, including equipment made available under section 372 of this title.”

And 10 U.S. Code § 284 calls for, “Support for counterdrug activities and activities to counter transnational organized crime.” Continued Below

President Trump has already detailed statistics and information proving there is a major drug problem that exists at the border. So tying both of the codes together in an effort to seek a wall appears to be a clear path as long as the Secretary of Defense is on board.

Democrats have made it extremely clear this shutdown is all about opposing Trump for them. It’s time to pursue other options. 10 USC 274/284 would allow for fence construction without national emergency. Protect our communities, build the wall, and forget unreasonable Democrats.