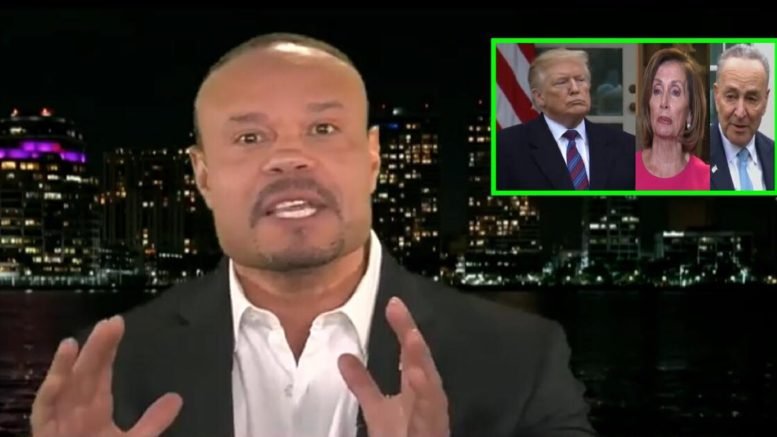 On Saturday, President Trump addressed the nation and outlined his plan to address border security concerns and put an end to the partial government shutdown. The plan includes the temporary extension of legal protections for DACA recipients and funding for the wall. (Video Below)

Dan Bongino said that President Trump has Democrats in a corner after offering a compromise package on immigration in an effort to end the partial government shutdown.

“The President has them in a corner right now, the democrats. You realize every individual component of the offer he’s now placed on the table for the Democrats, this compromise deal. Every single component of it, the Democrats have agreed to in the past,” he said.

Bongino added, “In some cases, with the Secure Fences Act and the wall portion of the money, they have agreed to more. They have nowhere to go on this. Listen, to the American public: the Democrats can no longer claim Trump is not interested in the deal. He gave you a deal.” (Video Below)

“They have already agreed to this stuff. The DACA portion of this stuff. The wall money. The length of the wall. They have agreed to more of this. He has got them in the corner and they are gonna have to explain why they don’t want to open up the government right now. They are holding all the cards,” he said.

When the President addressed the nation on Saturday, he introduced the main points of his proposed plan and said, “This is a common-sense compromise that both parties should embrace,” Trump said.  (Video Below)

President Trump also announced that he expected his proposed plan to be taken up in the Senate by Majority Leader Mitch McConnell quickly.

The Commander in Chief concluded in his speech, “Whatever we do, I can promise you this, I will never forget that my first duty and ultimate loyalty is to you, the American people. Any reforms we make to our immigration system will be designed to improve your lives, make your community safer, and make our nation more prosperous and secure for generations to come.”

The Democrats immediately rejected the deal, further dragging on the partial government shutdown for a month that has led to hundreds of thousands of federal workers being furloughed or working without pay.

(Related Article: Huckabee Zaps Pelosi With A Reality Check After Rejecting Trump’s Offer: ‘She Is Not Equal To The President’)