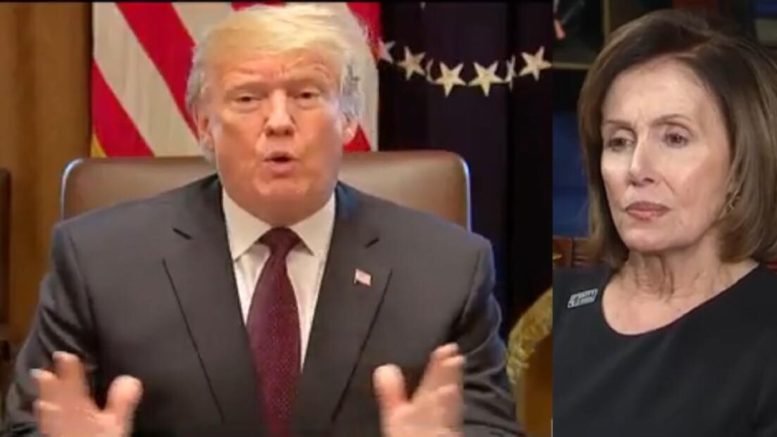 President Trump sent a letter to House Speaker Nancy Pelosi (D-CA) Wednesday pledging to continue on with the State of the Union address. This comes amid her trying to postpone his address to the nation. The President called her bluff and laid down the hammer.

Pelosi responded by sending a letter that said she will not allow the event to take place during the government shutdown. (Video Below)

President Trump on Wednesday morning told Pelosi he was still planning to deliver the address from the House floor. Minority Leader Kevin McCarthy also introduced a resolution to allow the State of the Union to go forward as planned on Jan. 29.

Pelosi made the final call in a letter to Trump saying she would not consider what’s known as a “concurrent resolution,” which is needed to allow the use of the chamber for the State of the Union.

“I am writing to inform you that the House of Representatives will not consider a concurrent resolution authorizing the president’s State of the Union address in the House Chamber until government has opened,” Pelosi wrote in the letter to Trump.

Pelosi added that she looks forward to welcoming Trump to the House “on a mutually agreeable date for this address when government has been opened.” (Video Below)

Reacting to Pelosi’s letter, Trump told reporters at the White House that Pelosi canceled the State of the Union address. “It’s really a shame what’s happening with the Democrats. They’ve become radicalized.” He said.

“She doesn’t want to hear the truth, and she doesn’t want more importantly the American people to hear the truth.” He added, “We just found out she cancelled and I think that’s a great blotch on the incredible country that we all love. It’s a great, great horrible mark. I don’t believe it’s ever happened before, [cancelling the SOTU] and it’s always good to be part of history, but this is a very negative part of history.” The President explained.

“This is where people are afraid to open up and say what’s going on. It’s a very, very negative part of history.” He added. (Video Below)

Further, Trump said that Pelosi has become radicalized by the left, and Chuck Schumer is Nancy’s puppet.

However the President hinted he will do something in the alternative.

President Trump’s full remarks on the State of the Union address: