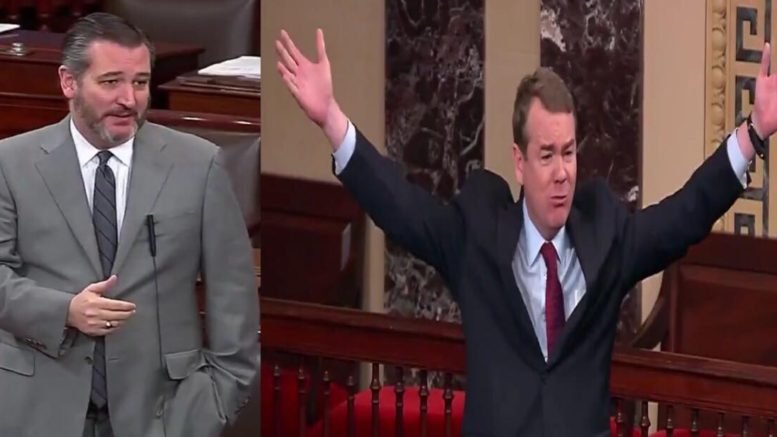 Amid the partial government shutdown, Senators spoke on the Senate floor Thursday before votes were cast to end the shutdown.

Sen. Ted Cruz (R-TX) roasted Democrats over their refusal to come to an agreement because they “hate Donald Trump”.

Sen. Michael Bennet (D-CO) had a meltdown on the Senate floor Thursday and accused Sen. Cruz of faking his desire to re-open the government.

“These crocodile tears that the Senator from Texas is crying for first responders are too hard for me to take,” Bennet said.

“They’re too hard for me to take because when the Senator from Texas shut this government down in 2013, my state was flooded. It was underwater!” Bennet yelled. Then, he went into full Trump derangement syndrome about the wall, where he called it a “medieval wall” and bashed the President.

Bennet was referring to the shutdown in 2013 that Cruz was credited for starting when he fought Democratic efforts to reduce Obamacare funding. That shutdown lasted 16 days. (Video Below)

Cruz took to the floor supporting the stance for a border wall and border security, and he added that he and his colleagues should discuss issues and facts and “simply not scream and yell at each other.”

Then, he laid out facts about Democrats voting in the past on a border wall and again last year. However, Cruz pointed out their fake outrage when Democrats filibustered and caused a shutdown last year.

“It takes some degree of Chutzpah to stand up after filibustering funding for the government, as the Democrats did, and blame the shutdown on the opposing party,” Cruz said. (Video Below)

Then, Sen. Cruz announced that a new adjective has crept into the Democrats’ language.

“It’s now, not 234 miles of wall, it’s a medieval wall!” Cruz announced. “I’m not sure if there’s something in it that has a moat and catapults and they’re throwing burning tar. Medieval wall now! Well if walls are medieval now, why did the Senator from Colorado and every other Democrat in 2013 vote for 350 miles of medieval wall? And to the extent, walls are medieval, they presumably were medieval in 2013, just as much as they are now.”

He pointed out he lives in a border state and knows what exactly is going on. Sen. Cruz also pushed back and exclaimed, “One of the rich things about this chamber is that Senators from states nowhere near the border, presume to lecture border states on what it’s like on the border and what works on securing the border. Walls are effective!”

Cruz continued his push for a wall where he laid out facts and pointed out why Democrats won’t vote for a wall.

“They voted for 350 miles of wall, so why are they shutting the government down over 234 miles of wall? It’s not substantive, it’s political,” he fired back.  (Video Below)

“Okay, we get they really hate Donald Trump. If anyone in America had missed that point that they really, really, really don’t like this man…. they’re yelling and screaming and bellowing has made that abundantly clear. But, just because you hate somebody, doesn’t mean you should shut the government down! Sen. Cruz declared.

He added, “I voted to keep this government open, right now today! The Democrats are filibustering for the government.”

Senator Ted Cruz also noted that Democrats voted “no” to pay the coast guard and that nobody stood up to their party’s leader to tell them that it’s wrong. “It’s not the end of the world to stand up to your party’s leader. Some of us have a history of doing so in the past,” he said.