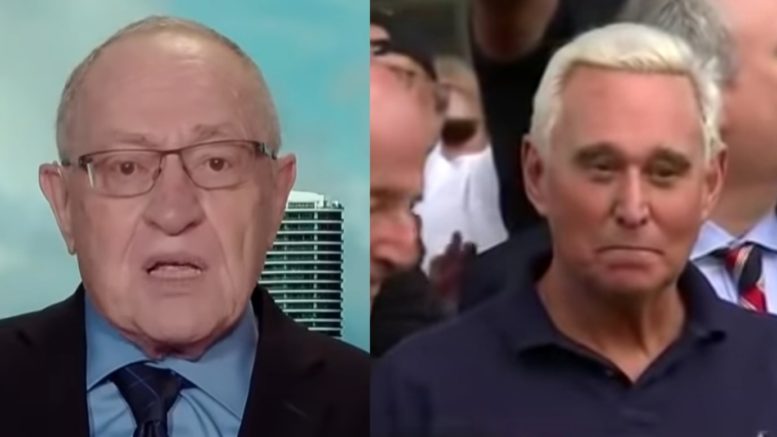 Following the arrest of Roger Stone, liberal law professor Alan Dershowitz appeared on Fox News to voice his reaction on the sudden turn of events.

Dershowitz offered key take-aways, including how Stone’s indictment and arrest mocks that of others handed down by Special Counsel Mueller, in that the crimes that are alleged in the indictments occurred after Mueller began his investigation.

Dershowitz said the President doesn’t necessarily have anything to worry about in terms of what was listed Stone’s indictment, since it shows no sign of Russian collusion and doesn’t directly implicate Trump in any wrongdoing.

However, he does say Mueller’s strategy of trying to intimidate Stone with a dramatic arrest and holding the prospects of a long prison term in front of his eyes should be the only concern for the President.

Dershowitz said Mueller is using a “disturbing,” yet common prosecutorial practice to try to “squeeze” Stone into testifying against Trump. And this is the same method Mueller has attempted against former campaign manager Paul Manafort and General Michael Flynn.

He claimed, “The object of these arrests is not to get people like Manafort or  people like Stone. It’s to get them to sing and perhaps even to compose and create guilt allegations against the real target here–the President.”

Although Stone has pledged in the past to not testify against President Trump, Dershowitz said it’s methods like the one he suspects Mueller is using that could cause Trump allies to turn on the President. He cited how Michael Cohen has turned on Trump, despite saying he would take a bullet for him in the past.

Dershowitz concluded in regards to if Mueller is using this dirty method with Stone’s arrest, “As a civil libertarian, it’ a very disturbing tactic.” Video Below