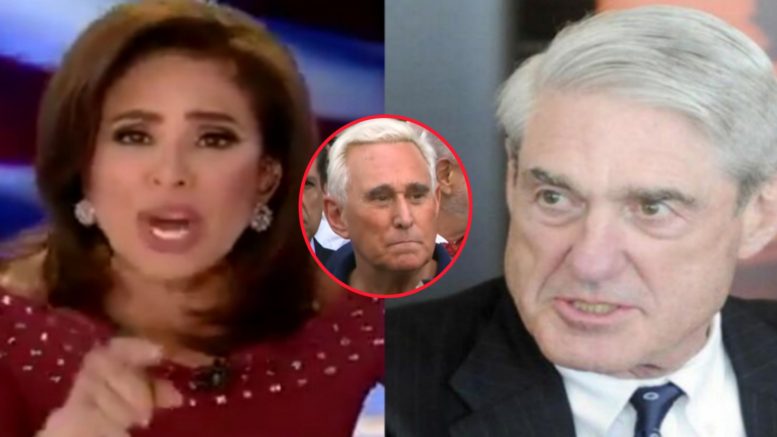 On Saturday evening, Judge Jeanine Pirro unloaded on Robert Mueller and the FBI over their dramatic arrest of Roger Stone.

Stone’s house was raided on Friday morning by several armed FBI agents who were wearing vests. Stone, his wife and his dogs were the only ones at the house at the time of his arrest.

Judge Jeanine found the method used to arrest Stone completely uncalled for, as the crimes he was alleged to commit were non-violent “process crimes,” and he is not at flight risk.

She also found it disturbing that CNN, of all sources, appeared to be tipped off on the pending arrest and were at Stone’s house at least an hour prior to his arrest.

Jeanine said no one should know about grand jury meetings and when an indictment is issued, as CNN must have been informed. Directing her statement at the network, Jeanine said, “It’s a crime for whoever alerted you to alert you. Although, I suspect, that Mueller won’t give a damn.”

Judge Jeanine shed light on her own experience dealing with a situation like Stone’s, and she declared, “What the Mueller team did here was not on laughable, it was embarrassing to everyone in law enforcement.” Video Below

She continued, “Waking a couple up pre-dawn is chaotic enough. But when the wife is deaf, a directive to her by someone with a gun drawn, when she can not hear a directive is a catastrophe waiting to happen.”

Jeanine said the purpose of the style of the arrest was to “intimidate and embarrass” Stone. She claimed, “Mueller’s intent was to poison the jury pool, to make Stone seem like public enemy #1.”

Finally, she brought up the double standard millions of people are wondering about after Stone’s arrest. And that is, what about Clapper, Brennan, Comey and Hillary? They all lied to Congress too!  Video Below

Stone lying to congress? Dear Hillary…She lies every time she opens her mouth. The only reason Abedin, Mills, Pagliano are not charged with process crimes is because Comey– who should be indicted himself — never bothered to investigate. God help America. pic.twitter.com/aTeynD7jmR