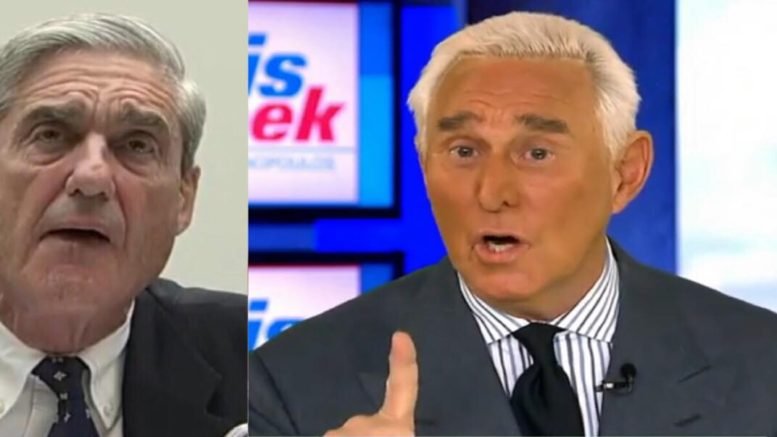 Roger Stone, former Trump adviser, was arrested in Fort Lauderdale on Friday morning after being indicted by a federal grand jury a day earlier.

Video aired by CNN shows numerous FBI agents raiding his house with guns, banging on Stone’s door at 6AM, and demanding that he come outside. Ironically, CNN was the only one tipped off, and they got the video footage of the FBI agents. (Video Below)

Roger Stone, interviewed Sunday on ABC’s “This Week” with host George Stephanopoulos and said that the indictment against him is “thin as piss on a rock,” and he pledged to fight for his life.

Asked if he’s prepared to spend the rest of his life in prison, Stone shot back, “In view of the fact that I expect to be acquitted and vindicated and that my attorneys … believe that this indictment is thin as piss on a rock, I’m prepared to fight for my life.”

(Related Article: After Appearing In Court, Stone Gives Anti-Trumpers Bad News: ‘The Charges In No Way Relate To Russia Collusion’)

The indictment unsealed Friday does not charge Stone with conspiring with WikiLeaks, the anti-secrecy website that published emails of Democrats during the 2016 campaign, or with the Russian officers Mueller says hacked them. Instead, it accuses him of lying about his interactions related to WikiLeaks’ release during probes by Congress and Mueller’s team, per Fox News. (Video Below)

Stone denied any wrongdoing and explained that he never received any stolen or hacked material and that he only took publicly available information and tried to get it as much attention as possible.

“All I did was take publicly available information and try to hype it to get it as much attention as possible because I had a tip that the information was politically significant and that it would come in October,” he said.

He also indicated that he may be willing to testify in Mueller’s probe, saying that he would need to consult with his attorneys, further adding that he would certainly testify honestly. (Video Below)

“If there’s wrongdoing by other people on the campaign that I know about, which I know of none, but if there is, I would certainly testify honestly. I’d also testify honestly about any other matter, including any communications with the president,” Stone said.

Following a court appearance last Friday, Stone pledged not to testify against Trump. “There is no circumstance whatsoever under which I will bear false witness against the president, nor will I make up lies to ease the pressure on myself.”

He vowed to fight the charges of witness tampering, obstruction and false statements brought by Special Counsel Robert Mueller, calling the charges politically motivated.  “I will plead not guilty to these charges. I will defeat them in court. This is a politically-motivated investigation.” Stone said.

(Related Article: Sarah Sanders Reacts To Roger Stone’s Arrest: ‘This Has Nothing To Do With The President’)