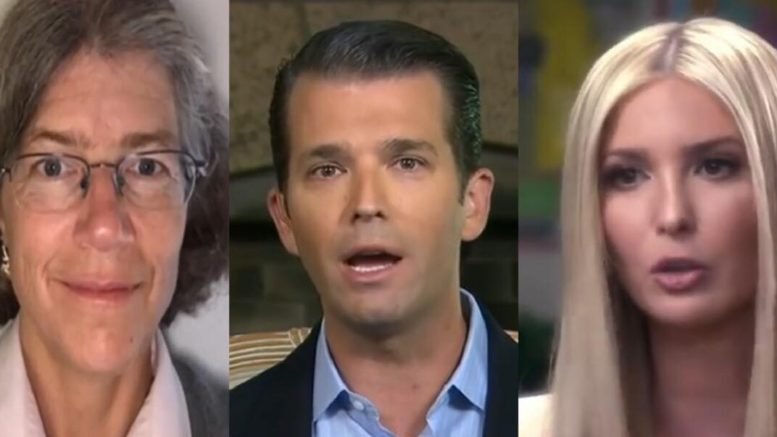 Nellie Ohr, the wife of Justice Department official Bruce Ohr, told Congress back in October that she investigated President Donald Trump’s children on behalf of Fusion GPS, the opposition research firm behind the Steele dossier.

Ohr also testified that during a meeting in July 2016, Christopher Steele passed her husband materials from his infamous dossier. Nellie Ohr, who worked as a contractor for Fusion GPS, looked into Donald Trump Jr. and Ivanka Trump’s business dealings and their travel.

The wife of a Justice Department official who worked for Fusion GPS during the 2016 campaign told Congress in 2018 that one of her tasks at the opposition research firm was to research President Donald Trump’s children, including their business activities and travel, reports the Daily Caller.

Donald Trump Jr. reacted to the revelations and wrote on Twitter Wednesday, “I’m SHOCKED!!! How much more of this farce are we going to have to take before people finally start investigating the investigators?”

He added, “What was allowed to happen here is a miscarriage of justice.”

Ohr said during the testimony that Steele, who like her was a contractor for Fusion GPS, hoped that her husband would pass the materials to the FBI. “My understanding was that Chris Steele was hoping that Bruce could put in a word with the FBI to follow up in some way,” Ohr testified to members of the House Oversight and House Judiciary Committees, according to transcripts confirmed by The Daily Caller News Foundation.

“And you hadn’t seen it or its portions during the time that you were employed, correct?” one lawmaker asked.

“If I recall correctly, I may have seen…maybe a page or something of it at the breakfast,” Ohr replied.

Ohr, a trained Russian linguist, also detailed some of the topics she worked on for Fusion GPS, which was hired by the law firm that represented the Clinton campaign and DNC to investigate Trump.

“But in terms of actually performing research, did you begin to break out President Trump’s family in terms of Melania Trump, all of his children? Were you doing independent research based off of each family member?” one lawmaker asked Ohr.

“I did some,” Ohr said. “As I recall, I did some research on all of them, but not into much depth.”

“I’m afraid it was relatively superficial. It was,” adding that, “I looked into some of his travels and you know not sure how much detail I remember, at this point.”

“I looked into some of her travels,” said Ohr.

The goal was “to see whether they were involved in dealings and transactions with people who had had suspicious pasts.”

Nellie Ohr also testified that she investigated any links between Russian oligarchs and the Trump real estate empire.

I’m SHOCKED!!! 🙄 How much more of this farce are we going to have to take before people finally start investigating the investigators?

What was allowed to happen here is a miscarriage of justice. https://t.co/mTRZL5LEEq