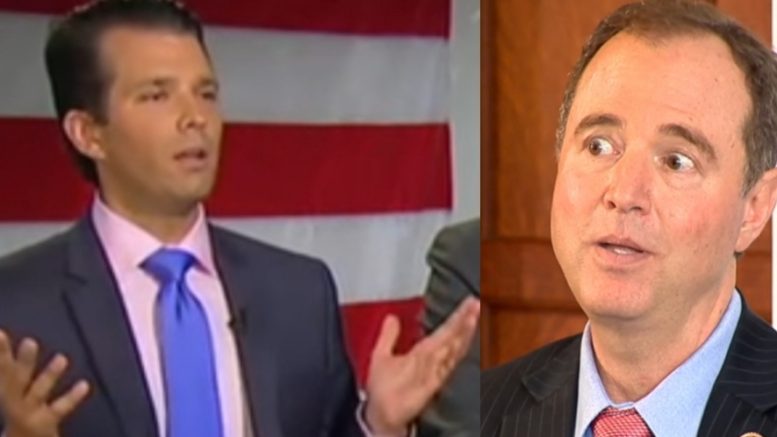 Donald Trump Jr. is breathing in a sigh of relief as more evidence proves another Democrat theory to be DEAD WRONG related to the Russian collusion investigation.

Reports surfaced on Thursday that the Senate Intelligence Committee uncovered the identities of mysterious blocked phone calls made by Trump Jr. right before and right after the Trump Tower meeting with Russians.

As per the Daily Caller, Democrat Adam Schiff and his colleagues speculated that the phone calls were Donald Trump Jr. communicating to his father about the Trump Tower meeting.

But this doesn’t appear to be the case, as the Senate Intel Committee revealed the identities of who Trump Jr. was talking to, which ended up being longtime acquaintances of the Trump family.

After seeing the news by ABC, Don Jr. took a moment to rub it in his nemesis Congressman Schiff’s face. See Below

Don Jr. tweeted the ABC article that vindicates him of more alleged wrongdoing and targeted Schiff with his caption.

He began with, “Has anyone heard from Adam Schiff?”

He added, “I imagine he’s busy leaking other confidential info from the House Intelligence Committee to change the subject?!? #FullOfSchiff” See Below

Has anyone heard from Adam Schiff?

I imagine he’s busy leaking other confidential info from the House Intelligence Committee to change the subject?!? #FullOfSchiff https://t.co/7CC6k0CjlJ

Chalk up one more win for the Trump family and another bitter loss for Democrats led by Adam Schiff!

We leave you with video of Diamond and Silk venting about Schiff.