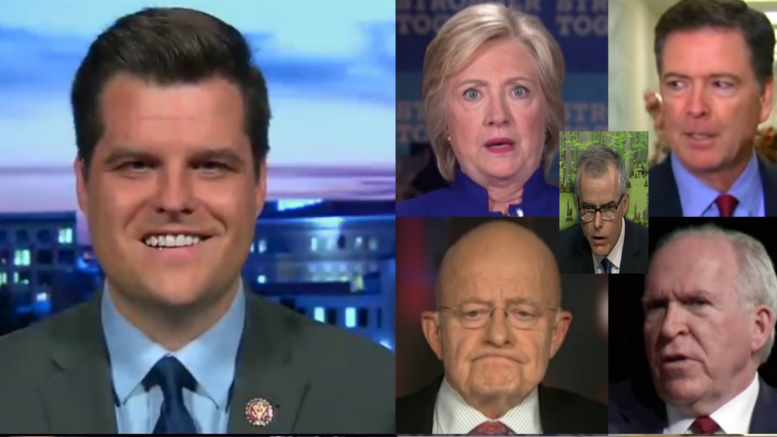 Matt Gaetz is sick and tired of the double standards that are currently playing out in Washington.

The over-dramatic arrest of Roger Stone, which was primarily the result of lying to Congress, appears to be the final straw for Gaetz. So now, he is about unleash a plan, that at the minimum, puts biased swamp tactics and double standards front and center.

In an interview with Tucker Carlson, Gaetz ripped Mueller’s indictment of Roger Stone and slammed him for becoming more of a “hall monitor” than an investigator.

On Stone’s arrest, Gaetz said, “I thought Robert Mueller was supposed to be investigating Russia collusion, but instead he has become a glorified hall monitor, enforcing the provisions of lying to Congress.”

Related Article: Stone Pushes Back When Asked About Life In Prison: ‘Mueller’s Indictment Is Thin As Piss On A Rock’

But what is most troubling to Gaetz is that Mueller is enforcing the provisions “unequally.” He used this notion as a backdrop for his plan on how to combat it.

Gaetz told Tucker he is introducing the Justice For All Act, which he said “will create criminal referrals for the other people that we know have lied to Congress.”

He laid out his case and point for how he knows people like, Hillary Clinton, James Comey, Andrew McCabe and James Clapper lied without retribution. The “Justice For All Act” will hold everyone who commits the same crime of lying to Congress equally accountable.

Gaetz then concluded this all is evidence that Robert Mueller isn’t in search of the truth and is purely “out to get Trump and the people close to Trump.” And if he wasn’t biased, there would have been action taken on others who committed the same crime as Stone. Video Below

Matt Gaetz Introduces the “Justice For All Act”

Rep. Matt Gaetz announces he's introducing the "Justice for All Act" to create criminal referrals for those who lie during congressional hearings. He then mentions Hillary Clinton, James Comey, James Clapper and Andrew McCabe. pic.twitter.com/Ro75TiW0wS

EXCLUSIVE: I’ll be unveiling the Justice For All Act tonight with @TuckerCarlson on @FoxNews at 8:30pm ET/7:30pm CT. A bill that forces anyone that who has lied to Congress, including #Clapper, #HillaryClinton, #Comey, #McCabe, and #Brennan, to be prosecuted equitably.