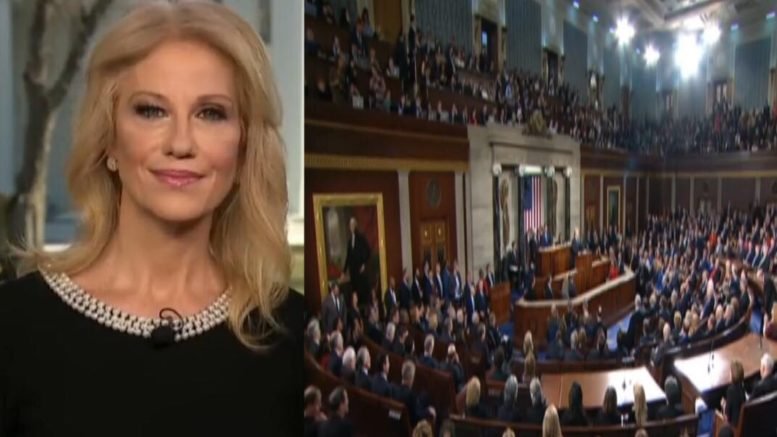 Counselor to the President, Kellyanne Conway, spoke with Harris Faulkner on Fox News Monday where she weighed in on President Trump’s upcoming State of the Union address.

The State of the Union is set to air on Tuesday evening at 9 P.M. EST. (Video Below)

As American eagerly awaits the President’s State of the Union on Tuesday night, Kellyanne Conway gave a little inside of what is to be expected.

She said the President will address the border wall, national security, and immigration over all.

“This is an address to the nation, but he’s in the chamber, in front of the Congress that’s failed to do its job for any number of years, if not decades, on getting us an immigration plan in the country, and of course, secures our southern border but also tackles the chain migration, the visa lottery system, TPS, DACA.” Kellyanne explained.

“But most importantly in the State of the Union, the President is calling for an end for sort of resistance and retribution politics and calling for a cooperation and compromise.” She added. (Video Below)

When asked if President Trump will call the barriers a “wall” in his address, Kellyanne said she won’t give it away but said, “I don’t think it matters and here’s why: it’s a silly semantics argument and now lots of people are saying that meaning.”

Kellyanne’s comments about the State of the Union address begin at 3:45: