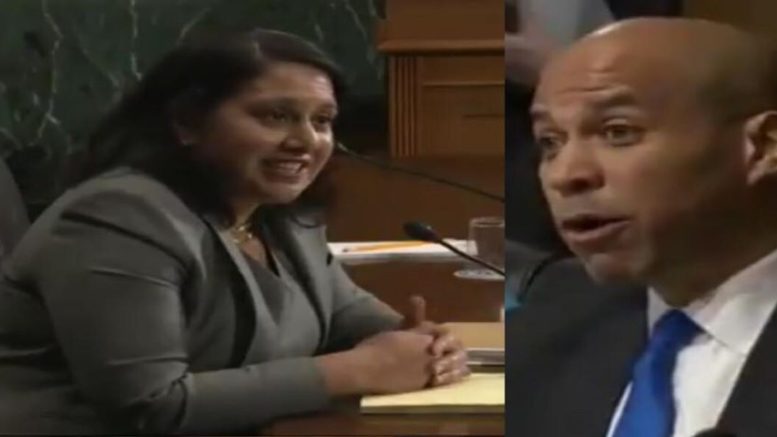 Another stunt sputters from “I Am Spartacus” Sen. Cory Booker (D-NJ) during a Senate Judiciary Committee hearing on Tuesday.

Booker tried to trap a judge nominee with a trick question, and it instantly backfired on him.  (Video Below)

In a failed attempt to criticize judicial nominee Neomi Rao for an assumed lack of diversity in law clerks, Rao pointed out she has never had any law clerks, because she never been a judge.

Booker asked Rao, “Have you ever had an LGBTQ law clerk?”

Rao responded, “I’ve not been a judge, so I don’t have any law clerks.”

Booker corrected his question and tried again, “I’m sorry working for you.” (Video Below)

Neomi Rao seemed stunned that Booker would even ask such a question, because that is not exactly something you ask an employee.

According to the U.S. Equal Employment Opportunity Commission:

Under the laws enforced by EEOC, it is illegal to discriminate against someone (applicant or employee) because of that person’s race, color, religion, sex (including gender identity, sexual orientation, and pregnancy), national origin, age (40 or older), disability or genetic information. It is also illegal to retaliate against a person because he or she complained about discrimination, filed a charge of discrimination, or participated in an employment discrimination investigation or lawsuit.

The law forbids discrimination in every aspect of employment.

(Related: After Being Told To Recuse Himself, Kavanaugh Flies Booker Back To The Cuckoo Nest)