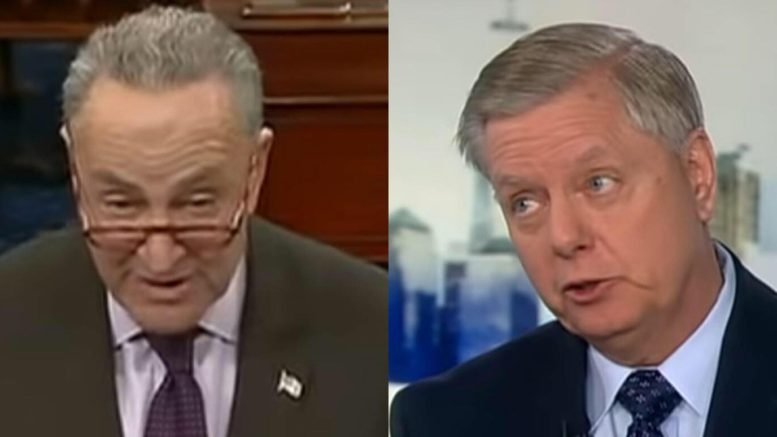 Sen. Lindsey Graham (R-SC) joined Martha MacCallum on Fox News Monday evening where he weighed in on border security ahead of President Trump’s State of the Union address.

Graham called out Sen. Chuck Schumer (D-NY) for his hypocrisy on border funding and refusing to work with President Trump. (Video Below)

Next, Martha MacCallum played a clip of Senate Minority Chuck Schumer, who said on the Senate floor Monay, “the state of our union is in need of drastic repair. The state of the Trump administration and how he runs the government– chaos. It is sad, the state of the union.”

Sen. Graham laughed at Schumer’s pathetic remarks and shot back. (Video Below)

“I think the President will lay out an economic agenda that’s worked. Remember the Obama years? Who wants to go back to that?” Sen. Graham asked.

Graham explained, “You had high taxes and low growth.”

Then he laid out, “What’s happened in the last two years? We’ve rebuilt the military, we’re about to destroy the Caliphate, we’ve cut taxes, the average worker has more pay in their paycheck, the economy is growing faster that even I envisioned. So, economically, domestically, we’re doing good overseas. We’re stronger than we’ve ever been.” (Video Below)

(Related: Trump Fires Back After Schumer Pre-Criticizes The SOTU Speech: ‘He’s Just Upset That He Didn’t Win The Senate’)