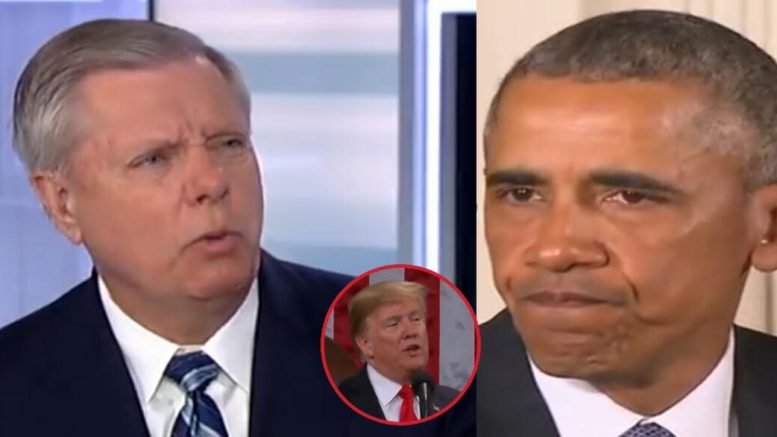 Tuesday night, President Trump spoke in the House chamber to the nation during the State of the Union address.

The President delivered a powerful and bold speech where he landed it. Further, it was mostly non-partisan and focused on unity. (Video Below)

Senator Lindsey Graham (R-SC) joined host Sean Hannity on Fox News after the State of the Union address where he weighed in on the President’s remarks about foreign policy, immigration, and the economy.

The discussion began with the announcement of President Trump meeting with North Korean Leader, Kim Jung Un, in Vietnam on February 27-28th.

Trump haters have criticized the President about North Korea, but Sen. Graham asked, “To those who are criticizing the President, how well did you do with Rocket man?” He added, “I’m very hopeful this new meeting will lead to a breakthrough. The question is: why is he meeting with Trump, and he didn’t meet with anyone else?”

Further, Graham asked,”Why do you think the Taliban are at the table [negotiating]? He added, “I know why. I’ve been there 52 times. Why are they talking with us now? Cuz’ when the first day [Trump] got in office, he told the military to kick their ass. We’ve been killing these guys by the thousands. We’ve been breaking their back, and Pakistan, for the very first time in a decade, is beginning to help us on their side of the border, because Trump has really unleashed the military. They’re at the table now, because of the change of rules of engagement after Obama left. Trump came in, and we may be able to end this war, if Pakistan will help us. I predict the Prime Minister of Pakistan and President Trump will get along very well. (Video Below)

Hannity pointed that we have made progress with Al Qaeda, Afghanistan, Iraq, Syria, North Korea and China as well.

“Why has the Caliphate been destroyed in the last 18 months? Graham asked, then answered, “Because, he unleashed the military. See, Obama made it impossible to win. Trump has made it possible to win, and we’re winning.”

Then he asked, “Why are the Europeans now cracking down on the Iranians? Because Trump gave them choice. You can help me rein in this Iranian regime, or you will not have access to our economy. Guess what? They picked our economy over the Ayatollah.” (Video Below)

Graham added, “Unlike Obama, he will adjust his policies where it makes sense. He has unleashed the military on our enemies. He’s gotten out of a bad deal, and I think he’s replacing it with a better deal. We’re more respected. We’re safer today than we were two years ago, and it’s because of this president.”

Next, Hannity and Graham switched the subject to the booming economy under President Trump.

The South Carolina Senator said, “[Trump] took everything Obama did to suppress economic growth and replaced it with pro growth policies. He took all the fighting with one hand behind your back-fighting approach to terror and unleashed the military. Everything Obama did, this guy is doing opposite. He declared, “And, it’s working!”

Hannity pressed, “Will your Republican colleges do what is right?”

Graham revealed, “They will if people like you remind them. I think that will help. To my Republican friends: get on the Train.” (Video Below)