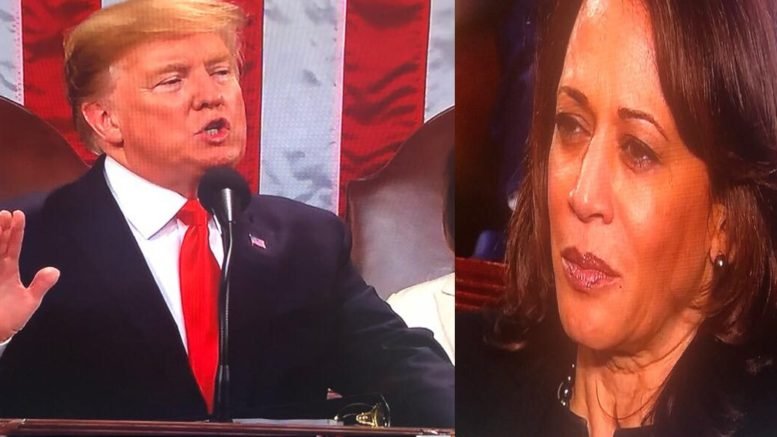 Tuesday night, President Trump spoke in the House chamber to the nation during the State of the Union address.

The President delivered a powerful and bold speech where he landed it. Further, it was mostly non-partisan and focused on unity. Democrats however, were not impressed. (Video Below)

President Trump brought up lawmakers who celebrated full term abortions and called them out for advocating the murder of born alive babies. Further, he called for legislation to protect babies that would ban late-term abortions.

“To defend the dignity of every person, I am asking the Congress to pass legislation to prohibit the late-term abortion of children who can feel pain in the mother’s womb,” President Trump said. “Let us work together to build a culture that cherishes innocent life. And let us reaffirm a fundamental truth: all children – born and unborn – are made in the holy image of God.” (Video Below)

Several people are appalled at a law signed by New York Democrat Governor, Andrew Cuomo, that permits abortion after 24 weeks. A celebration followed, and they lit the One World Trade Center pink.

Ralph Northam’s recent comments also disturbed many where he supports a late-term abortion bill that would loosen restrictions on the procedure. Northam added that if a woman were to desire an abortion as she’s going into labor, the baby would be resuscitated ‘if that’s what the mother and the family desired’.

What’s more, after the State of the Union address, Senator Kamala Harris took to Twitter with an eerie post that immediately backfired. She wrote with several hand emojis clapping, “Politicians should not tell women what to do with their bodies. #SOTU” (Video Below)

Democrats refuse to stand or clap.

Ocasio-Cortez has a noticeable scowl on her face. pic.twitter.com/m10ImLlNNj

Your body has had all kinds of freedom. That’s why they call you #HorizontalHarris. The body we are trying to save is that of the viable baby you’ll like to kill and toss away for convenience

its the babys body…

My mom had full placenta previa, had to have double blood transfusion. Neither one of us was expected to live. I was born by C-section 4# 1oz and have enjoyed 68 years of glorious life. My mom had two more children after me. God’s plan was fulfilled.

I was pro choice my entire life…you lost me at 9 months. I’m flipping sides. The Left is CLEARLY clinically insane. Sorry, sweetheart. This used to be about “point of viability”…9 months is a fully developed child. That’s murder, pure and simple.

It’s a 9 month old baby ready to come out.

It’s not a “woman’s body” at that point.

That’s what we call murder! #Sotu

As a Dem ,I side with Republicans on this one.

Kamala, just keep your feet on the floor…and be quiet🤬

You get upset about children being separated from parents at the boarder, but 👏🏻 for children being killed in the hands of doctors. Sad. Seems a bit backwards to me.

Kamala, it looks like you got the CLAP 👏from Willie.

After a baby is full term or after they are born NO WOMAN has the right to have that child murdered. Period pic.twitter.com/AVyFA2miz6