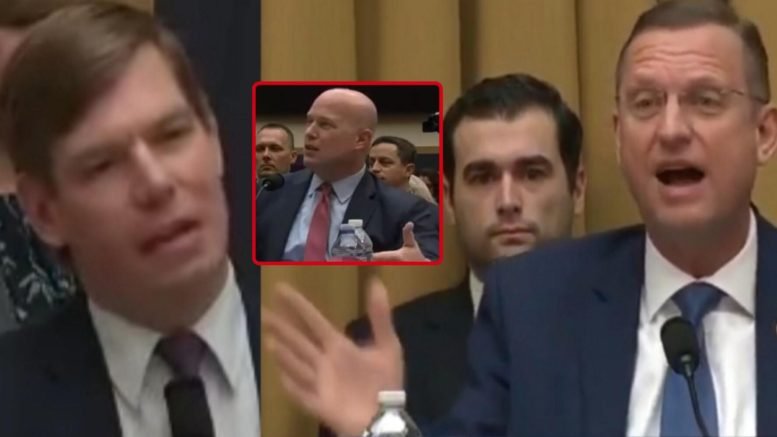 During the hearing, Rep. Eric Swalwell (D-CA) was filled with Trump derangement syndrome and acted like it clown. It was on full display for everyone to see.

Democrats used this opportunity during the hearing to pretend that they were having a nomination process for Whitaker. However, Whitaker has 6 days left before William Barr takes over.

Things became heated initially when Rep. Doug Collins (R-GA) pushed back at a line of questioning by Swalwell and later suggested he should stop “running for president.”

Collins objected to Swalwell pressing Whitaker on whether an organization the Acting Attorney General ran, prior to joining the Trump administration. Swalwell wanted to know if the organization received contributions from foreign donors. (Video Below)

“This is outside the scope of this hearing,” Collins interjected. “This is not when he was employed here.”

Swalwell threw a temper tantrum and suggested that Collins should “go sit down” with Whitaker’s lawyers if he wanted to defend him. “Mr. Collins, if you want to sit down there with his lawyers, you can go sit down there. But you’re not his lawyer.”

“Neither are you, Mr. Swalwell, and if you asked questions that are actually part of this instead of running for President, we could get this done!” Collins hilariously shot back. (Video Below)

However, the anti-Trump Democrat congressman didn’t stop there and made a fool of himself again.

Swalwell tried to get Whitaker to publicly tell President Trump that special counsel Robert Mueller is honest and not conflicted.

“I am not your puppet, to repeat what you are saying,” Whitaker responded to Swalwell.

Swalwell then demanded that Whitaker announce publicly how he felt about Mueller, but Whitaker denied him again.

Whitaker shot back while seeing through Swalwell’s childish approach and said firmly, “Congressman, I am not here to be a puppet to repeat terms and words that you say… that I should say.”

(Related: Democrat Rep. Puts His Full Irritation On Display While Grilling Whitaker: ‘Keep Your Hands Off The Mueller Investigation!’)

(Related: Sheila Jackson Demands Whitaker Answer ‘Yes Or No’, Collins Fires Back: ‘Where Were You When Lynch & Holder Were Here!’)