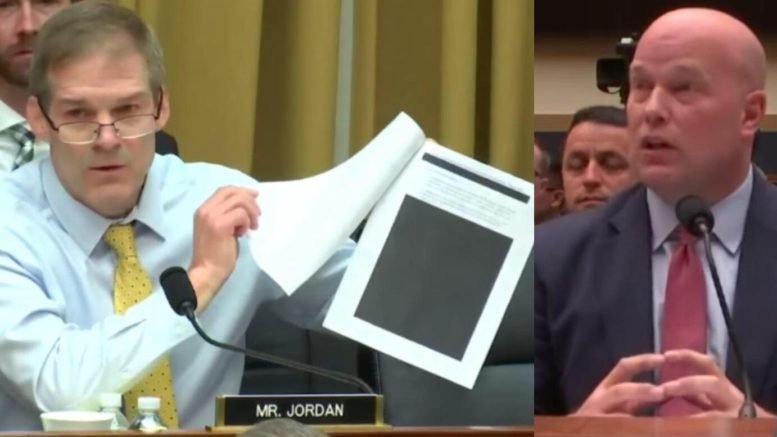 During the hearing, Rep. Jim Jordan (R-OH) was one of the few who did not press Whitaker about the Russia with hunt, but instead, he did share his concerns about another controversy. And Jordan wanted answers.

Jordan held up the redacted memo and wanted to know if Whitaker knew what was under the readactions.

Whitaker confirmed that he knew what the memo entailed under the redactions. (Video Below)

Then, the Ohio congressman wanted to know if there are names under the redactions.

Whitaker explained that in his experience there would not be a public document with identified targets or a subject matter of an investigation.

Jordan rephrased his question and asked, “Let me put this way: did Rod Rosenstein give the special counsel the authority to investigate specific Americans?” (Video Below)

“You said yes. So, I want to confirm there are specific names two and half months into the investigation that Rod Rosenstein gave the special counsel specific American names to go investigate?” Jordan inquired.

Whitaker dodged the question, mainly because he couldn’t talk about an “ongoing investigation.”

“Okay, let me ask you this way…” Jordan said, “Can you give us assurances that there are not specific names under this 70 percent redacted memo that Rod Rosenstein sent to the special counsel?”

(Related: Right As Rosenstein Tries To Sneak Away, Jordan Makes A Move To Pull Him Back To Congress)

Jordan continued the pressure, “You know why I’m asking you this question, Mr. Attorney General. Because in this country, we don’t investigate people, we investigate crimes.” He pointed to the memo and added, “If there are specific American citizens names in this memo… and I asked Mr. Rosenstein to see this, and he got all mad and huffy with me in his office and wouldn’t show it to me.”

Whitaker couldn’t give the Jordan the answer he wanted because it pertained to an “ongoing investigation.” (Video Below)

“We investigate crimes and not individuals.” Then, what do you call the Mueller investigation into the Trump campaign?

Related: Sheila Jackson Demands Whitaker Answer ‘Yes Or No’, Collins Fires Back: ‘Where Were You When Lynch & Holder Were Here!’)