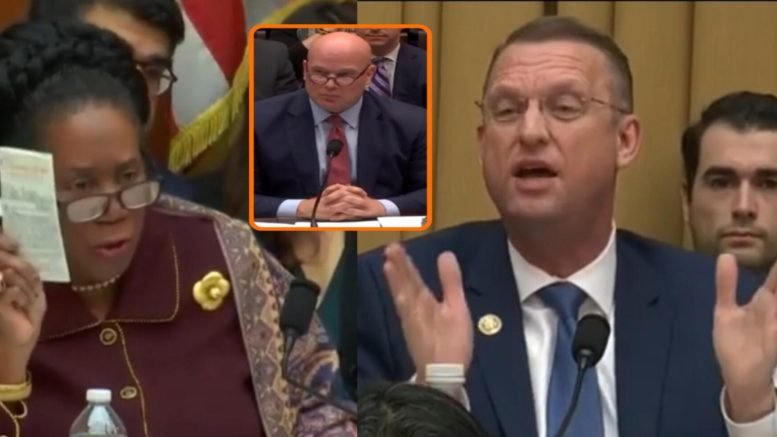 During the hearing, Rep. Sheila Jackson (D-TX) became extremely triggered with Acting Attorney General Matthew Whitaker as he was not answering her questions specifically in a “yes or no” matter to her liking.

Further, it seems Democrats are extremely mad they didn’t get a chance to have a “nomination hearing” for Whitaker and so, they were pretending this was one.

She began by asking Whitaker, “You did not have a confirmation hearing and have not appeared  for an oversight hearing, yes or no?”

Whitaker tried to answer her first question and she became flustered when Whitaker didn’t immediately answer directly with a “yes or no.” (Video Below)

Chairman Jerry Nadler interrupted, and then he demanded that Whitaker answer Jackson how she wants.

The Ranking Member, Doug Collins, (R-GA) interjected and declared that Whitaker should be able to answer as he feels it, pointing out that many Democrat officials in the past have answered the same way.

Nadler became triggered next, and he said he won’t allow the witness to stall and waste members time. (Video Below)

Rep. Doug Collins shot back while standing up for Whitaker and asked of Nadler, “What? Where were you when Ms. Lynch or Holder were here?”

Jackson began her questioning again, but chatter was going on. She looked around and when Whitaker answered he said, “I’m sorry, I don’t know if your time has been restored or not.”

Jackson blew up and responded, “Mr. Attorney General, we’re not joking here!” She held up the Constitution waving it around, instead of wagging her finger at him, and she added, “Your humor is not acceptable. Now you are here because we have a constitutional duty to ask questions, and the Congress has the right to establish government rules.”

Then, she then suggested that Whitaker needed to behave appropriately.

She continued her questions, but she was not pleased as Whitaker wasn’t falling for her Russia games and a fantasy of a “nomination process.”