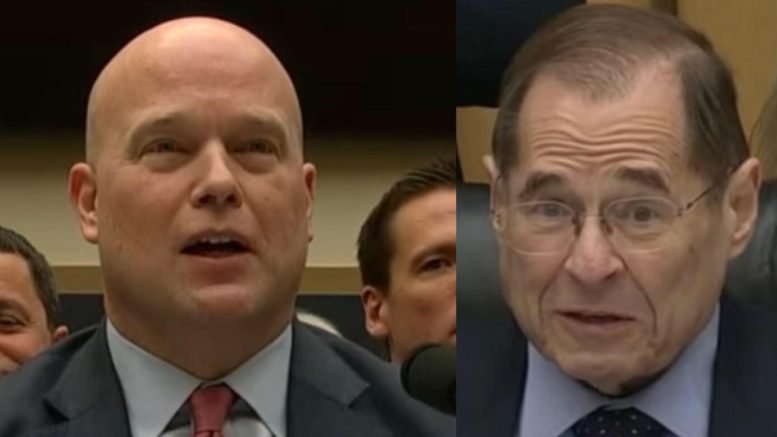 While being grilled with the first questions from Democratic chairman Jerry Nadler (D-NY), Whitaker read through the lines and saw that the hearing is focused on questions all geared toward the Mueller probe. However, Whitaker, wasn’t intimidated and he did not directly answer several of Nadler’s questions, because Mueller’s investigation is ongoing.

The top Republican on the committee blasted the hearing as a dog and pony show.

“This hearing is a character assassination on Acting Attorney General Whitaker, all pure political theater, to go after the president,” Ranking Member Doug Collins (R-GA) said in his opening statement while urging the committee to adjourn.

While answering questions from Nadler, Whitaker drew laughter from the room when he tried to call time on the Democratic chairman after yet another line of questioning regarding Robert Mueller’s witch hunt. (Video Below)

Chairman Nadler first said he wanted Whitaker to appear for a private deposition after the hearing and went on to ask Whitaker whether he had been asked to approve any requests or action for the special counsel.

“Mr. Chairman, I see that your five minutes is up, so…” Whitaker replied as the hearing room broke out in gasps and laughter. “I am here voluntarily. We have agreed to five-minute rounds.”

Nadler repeated his question, and Whitaker ultimately responded: “I have not interfered in any way with the special counsel’s investigation.” (Video Below)