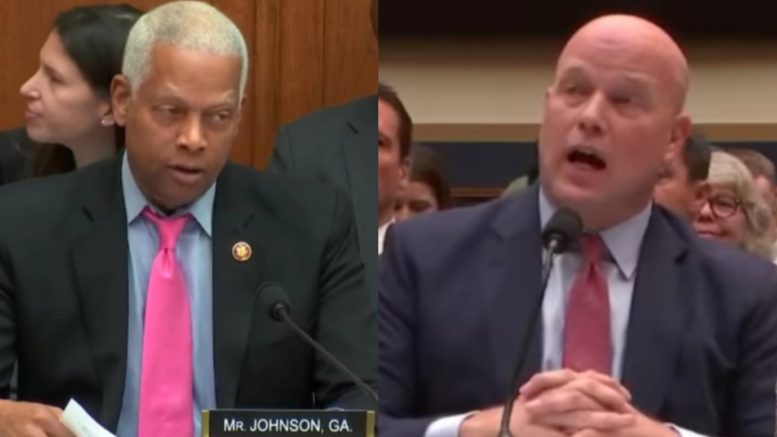 On Friday, Representative Hank Johnson (D – GA) got his shot at asking a round of questions to Acting Attorney General Matt Whitaker.

Johnson primarily focused on the subject of recusal and questioned why Whitaker didn’t recuse himself in Robert Mueller’s investigation at the advice of ‘career officials’ at the Department of Justice.

Johnson asked Whitaker, “Isn’t it a fact that career officials at the DOJ recommended that you recuse yourself to avoid an appearance of a conflict of interest or bias? That was the guidance you got from career DOJ officials about your participation or oversight of the Mueller investigation, isn’t that correct?”

Whitaker responded by saying that he ultimately made the decision not to recuse himself on his own after consulting with an array of individuals on the matter.

Related Article:  Sheila Jackson Demands Whitaker Answer ‘Yes Or No’, Collins Fires Back: ‘Where Were You When Lynch & Holder Were Here!’
He said, “I consulted with career ethics officials, I consulted with my staff, I consulted with the office of legal counsel. It was my decision to make. I decided not to recuse.” Video Below

Not happy with Whitaker’s answer, Congressman Johnson pointed to four individuals who he believes guided Whitaker not to recuse himself.

In a heated exchange, Johnson went as far as accusing Whitaker of “obstruction and refusal” to answer his question.

Whitaker raised his voice and said, “I’m not obstructing anything, I’m answering your question! I consulted with a lot of people regarding my recusal.” He even named those who helped guide him at Johnson’s request. Video Below

Rep. Johnson Gets Schooled While Questioning Why Whitaker Didn’t Recuse Himself