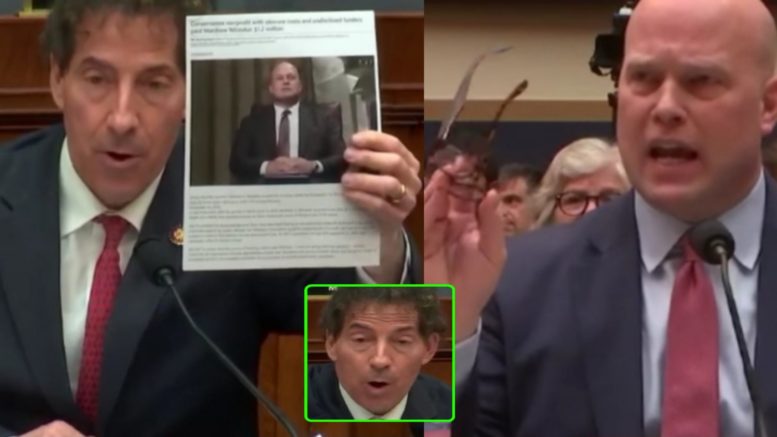 Acting AG Matt Whitaker got more than his fair share of character assassination while facing members of Congress during his public hearing on Friday.

As President Trump pointed out, Whitaker received ‘vicious’ treatment from Democrat members of Congress as they tried to pry answers out of him. And there were, at many times heated exchanges made between Whitaker and Democrats on the committee.

One of the most heated moments came when Whitaker faced off against Representative Jamie Raskin (D – MD).

Pressure was high from the get-go between Raskin and Whitaker, as the representative from Maryland questioned Whitaker about a charity that he led before being involved in the DOJ. He held up a report with Whitaker’s picture on it and questioned what the name of the charity was that he oversaw and who funded it.

Related Article: Congressman Gets Schooled While Questioning Why Whitaker Didn’t Recuse Himself: ‘It Was My Decision To Make’

Whitaker was rudely interrupted as he attempted to respond. He defiantly told Raskin, “You have challenged my character and I have an ability to answer…” before he was repeatedly interrupted again. Video Below

The heated back and forth between Raskin and Whitaker then shifted to Chairman Nadler and Rep. Collins, as Nadler was then forced to call a vote to allow Raskin to continue.

Raskin was able to proceed, where he then pushed his “theory” that Whitaker could be connected to a gambling mogul. Video Below

We leave you with President Trump’s reaction to Whitaker’s hearing.

The Democrats in Congress yesterday were vicious and totally showed their cards for everyone to see. When the Republicans had the Majority they never acted with such hatred and scorn! The Dems are trying to win an election in 2020 that they know they cannot legitimately win!