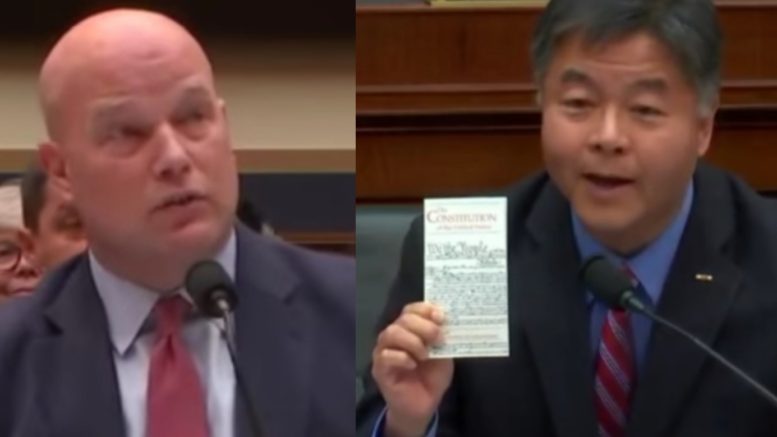 At the beginning of Acting Attorney General Matt Whitaker’s congressional testimony, Rep. Collins considered it nothing more than another character assassination attempt by Democrats.

As the hearing played out, Collins’ notion proved to be true as questions asked by Democrats, including Ted Lieu (D-CA) had very little to do with oversight, as was supposed to be the intention of the grilling session.

Lieu got his turn to question Whitaker, in what was a strange turn of events.

Instead of focusing primarily on Whitaker, Lieu decided to ask Whitaker about what is written and not written in the U.S. Constitution.

Lieu asked Whitaker about a series of individuals, including the President’s children, the Vice President and the President himself, and if it’s written anywhere in the US Constitution that says they can’t be indicted.

Whitaker agreed that it is not written the Constitution and attempted to expand on his answer as to why the DOJ practices that policy to which Lieu responded, “I don’t actually care what DOJ policy is, I’m asking about the Constitution.” He added, “After this hearing, you can spin the Constitution how you want.”

Whitaker tried to provide more of a response, but Lieu kept interrupting him and making it seem like Whitaker didn’t want to answer the question. Lieu held up the actual U.S Constitution and said, “I’m not trying to trick you. It’s not a hard question.” Video Below

Ted Lieu Oddly Grills Whitaker On The US Constitution