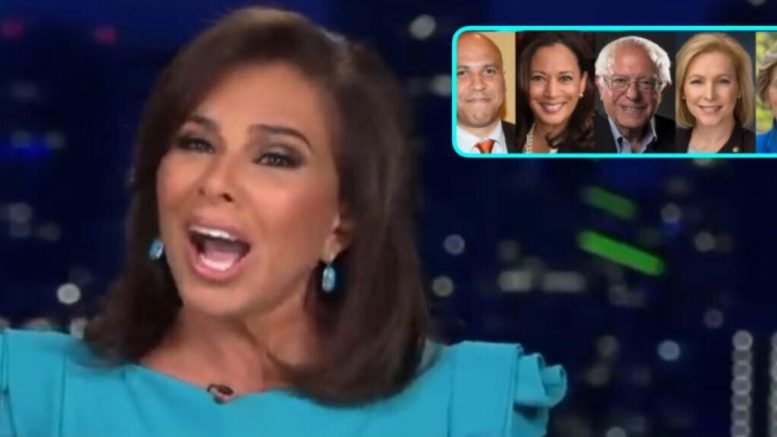 Saturday night in her opening, Judge Jeanine Pirro laid out how far left Democrats are moving, and she made it clear that America has a decision to make.

“We are reaching a turning point that will forever determine our future,” she explained. (Video Below)

Judge Jeanine began her opening explaining, “Every time we turn on a TV, open a laptop or listen to the radio, another bizarre, offbeat, outlandish idea brings us closer to socialism and the destruction of capitalism. And it is being pushed by the left.”

She said that America has a decision to make with two important questions.

“So you have a decision to make. Do you want to live in a country where no matter how hard you work, no matter what you do or how much you succeed, you simply won’t improve your lot? The Judge asked.

“Do you want to benefit from your own success or would you prefer to let the government take over and use your benefit to pay everyone else?” She inquired. (Video Below)

Judge Jeanine discussed the “New Green Deal” proposed by Democrats that has become a laughing stock and is being supported by Senators Cory Booker, Kamala Harris, Bernie Sanders, Kristen Gillibrand and Elizabeth Warren.

Some of the proposals in the deal requires that every building in America be rebuilt for environmental reasons and that high-speed rail be developed so that air travel becomes unnecessary. Further, the New Green Deal foresees Medicare for all and considers a deficit not that big of a deal, because, according to Ocasio-Cortez, we can just print more money.

“You know what? You should have left your Monopoly game home when you came to Washington, Ms Ocasio-Cortez.” The Judge said. (Video Below)

Then, Judge Jeanine laughed at the idea of Democrats wanting to remove cow flatulence.

“But my favorite part of the New Green Deal is where they seek a net zero greenhouse gas in 10 years. So you may ask why “net zero” as opposed to zero? The reason is that they are not sure they will be able to get rid of bovine flatulence. I can’t believe I just said that — aka, cows farting.” She said.

The Judge continued, “These emissions from cows are of concern to the left because these bovine emissions have an environmental impact and the methane gas produced by the bovine flatulence contributes to the greenhouse gases that contribute to global warming. Need I say more?!”

Next, she slammed Democrats for their hypocrisy with the episode that is surrounding Virginia politicians with black face and sexual assault claims.

“Who are these people? They are people who are more hateful of one man, our President, that it matters not that he wants to protect babies or stop human trafficking or eradicate AIDS. I’ll tell you who they are. They are people who don’t care about us. They only care about power and making sure that they keep it.” She declared.

“And if you think socialism will never happen in this country, just take a look at what has happened in the last 10 days and ask yourself that question one more time.” The Judge concluded.