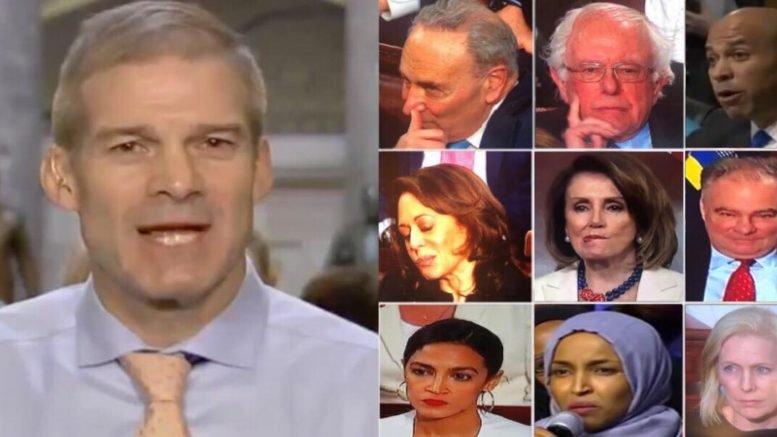 Rep. Jim Jordan (R-OH) took to Twitter on Tuesday, where he laid out five critical missteps Democrats made over the last week that show their true colors.

Democrats are on a path of destruction to destroy America.

Democrats in Congress are being exposed for the true frauds they are. More importantly, they have shown that they don’t care about Americans, but rather, power and their pocket books.

Rep. Jim Jordan laid out exactly what unfolded in the last week with Democrats that you can’t even make up.

He wrote on Twitter, “The Left in 1 week: -Anti-Semitic comments -Release criminals from ICE detention -Give taxpayer money to people “unwilling to work” AND won’t stand when @POTUS says “All children—born and unborn—are made in the holy image of God” and “America will never be a Socialist country.”

Jordan hit the nail on the head. (Continued Below)

In the last week, anti-Semitic comments were fully displayed from freshman congresswoman Ilham Ohamr when she said that the Republican support for Israel is “all about the Benjamins.”

Further, Democrats have proposed a cap on the number of available beds in ICE detention centers with the goal of forcing the Trump administration to prioritize arresting and deporting only violent criminals and dangerous offenders. President Trump pushed back at the Democrats proposal and tweeted on Monday, “The Democrats do not want us to detain, or send back, criminal aliens! This is a brand new demand. Crazy!” (Continued Below)

Some of the proposals in the deal requires that every building in America be rebuilt for environmental reasons and that high-speed rail be developed so that air travel becomes unnecessary. Further, the New Green Deal foresees Medicare for all and considers a deficit not that big of a deal, because, according to Ocasio-Cortez, we can just print more money. The deal also suggested giving taxpayer money to people “unwilling to work.”

(Related: Judge Jeanine Reveals What Is Up Dems’ Sleeves & Proposes Two Choices: ‘Who Are These People?’)

During the President’s State of the Union address, bitter Democrats refused to stand or clap during profound moments that all Americans should be on board with.

Rep. Jordan pointed out that they did not stand when the President said “All children—born and unborn—are made in the holy image of God,” nor did they stand when Trump declared “America will never be a Socialist country.”

AND won’t stand when @POTUS says “All children—born and unborn—are made in the holy image of God” and “America will never be a Socialist country.”

We leave you with President’s Trump’s interview with Laura Ingraham after his rally in El Paso, Texas where he discussed some of these matters: