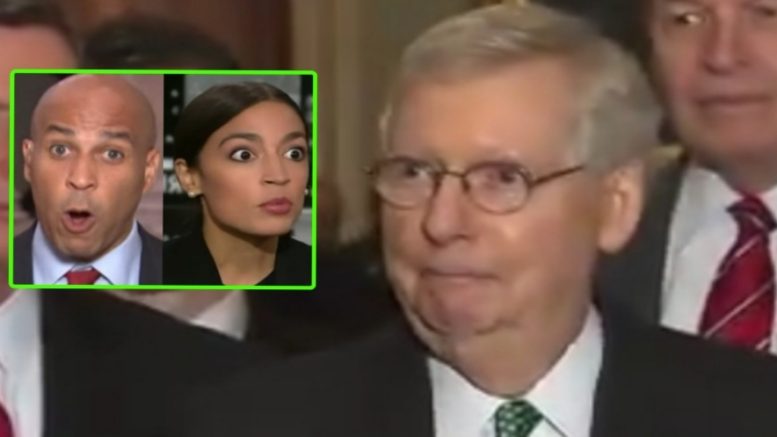 On Tuesday, Senate Majority Leader Mitch McConnell came out of the woodwork in calculated fashion to put the hurt on Democrats’ agenda once again.

Democrats have been attempting to back pedal the rollout of Alexandria Ocasio-Cortez’s endorsed Green New Deal that has been ridiculed since being featured on her website and immediately pulled.

The Green New Deal, which calls for decimation of aircraft and cow flatulence among other things that are theoretically bad for the environment, initially received support by Democrats, including their 2020 contenders.

But that all changed once Cortez removed details of the plan from her website after being virally ridiculed across the web and by key Republican leaders.

Now, as the Green New Deal begins to spiral into the depths of no return, McConnell upped the ante to see exactly where all lawmakers stand on the doomed deal created by far left Democrats.

With a smirk on his face, McConnell addressed the Green New Deal while speaking with reporters.

Related Article:  Ted Cruz Slams Dems Who Sat While Trump Rebuked Socialism: ‘They Sorted The Wheat From The Chaff’

.@Senatemajldr: "I've noted with great interest the Green New Deal. And we're going to be voting on that in the Senate. Give everybody an opportunity to go on record and see how they feel about the #GreenNewDeal.

OH sheeit 😳😂😭 This is some #Thuglife