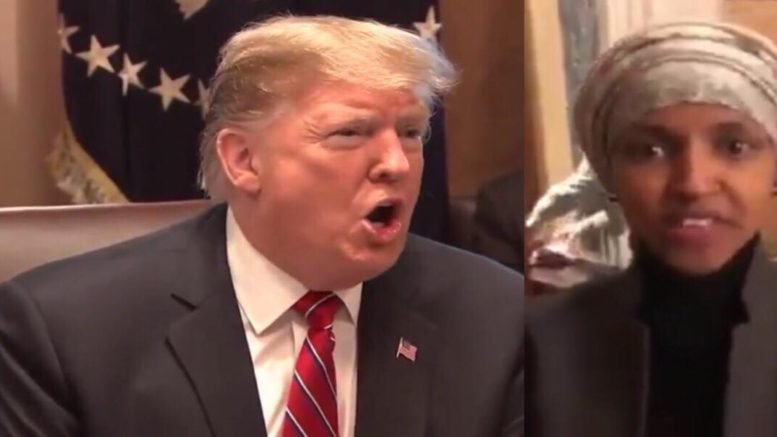 Freshman congresswoman Ilhan Omar (D-MN) was forced under pressure, to apologize after her anti-Semitic remarks she made on Twitter about lawmakers being bribed to support Israel. She said that the Republican support for Israel is “all about the Benjamins.”

Omar’s apology is receiving heavy backlash from both sides of the isle after she wrote it on Twitter, because it did not seem sincere. (Videos Below)

There is a double standard when it comes to Democrats and Republicans. Just last month, Congress was tripping over their feet to condemn white supremacy remarks from congressman Steve King (R-IA), who apologized, but later, was thrown off his committee assignments.

Now, those same members are tripping all over each other and running away from the House floor, so they don’t have to condemn anti-Semitism. They are accepting an apology on Twitter from Ilham Omar that won’t be the end of it. Her apology displays a lack of empathy and true understanding.

President Trump on Tuesday, suggested that he believes congresswoman Ilhan Omar should either resign from Congress or at least, from the House Foreign Affairs Committee. (Videos Below)

When asked about her comments on Tuesday, President Trump called for her to resign.

“I think she should either resign from congress, or she should certainly resign from the House Foreign Affairs Committee,” President Trump told members of the White House Press Pool, adding that the hateful comments are “deep seeded in her heart.”

President Trump also said that her apology was lame and that she didn’t mean a word of it, further noting that it was just not appropriate. (Videos Below)

President Trump said anti-Semitism has no place in the United States congress.

President Trump on anti-Semitic Rep. Ilhan Omar (D-MN) "Her lame apology, and that's what it was, it was lame, and she didn't mean a word of it, was just not appropriate. I think she should resign from Congress." pic.twitter.com/ZLFwDOttqa

Further, when confronted by reporters on whether Omar was worried about losing “committee assignments” over her anti-Semitic tweets, she said, “Absolutely not.”

Watch as she chomps on her gum like a horse and smugly responds:

When questioned this evening on whether she was worried about losing “committee assignments” over her anti-Semitic tweets, Rep. Ilhan Omar said, “Absolutely not.” pic.twitter.com/4juYghwtCg

(Related: Scalise Presses Dems With A Call To Action To Prove They Really Condemn Omar’s Remarks)