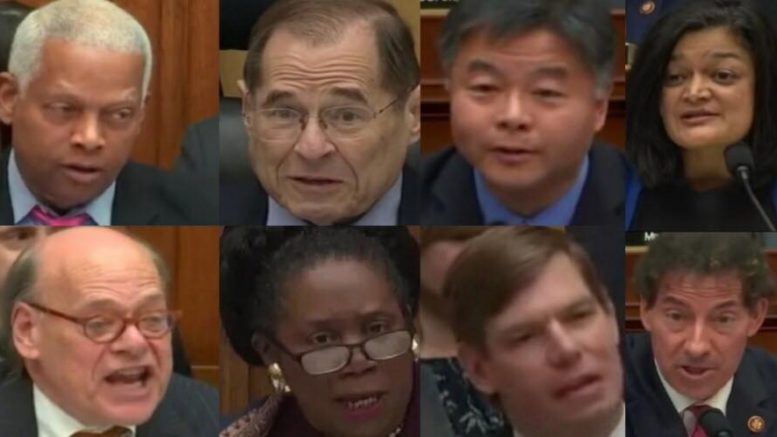 House Democrats introduced a legislation, H.R. 8, in honor of the eighth anniversary of the January 8, 2011, attack on Gabby Giffords. Giffords stood with the Democrats as they introduced their gun control.

The House Judiciary Panel marked up the bill on Wednesday.

During the House Judiciary meeting, several amendments were introduced alongside H.R. 8, that many were voted against because of Democratic obstruction.

H.R. 8 would outlaw the private gun sales Americans have enjoyed since December 15, 1791, the date on which the Second Amendment was ratified. This would criminalize a neighbor who sold a gun to lifelong neighbor without first getting government permission via a background check. It would also criminalize a friend for selling a gun to lifelong friend without government permission, according to Breitbart.

Other parts of H.R. 8 include: making it illegal for law-abiding citizens to take basic steps to protect themselves from criminals and abusers, and H.R. 8 would make it illegal for a domestic abuse or stalking victim to borrow a gun from a friend for protection, unless the threat is “imminent.” (Continued Below)

Further, it should be clearer than ever that Democrats choose illegals over Americans as they continue to protect them from law enforcement agents.

Rep. Matt Gaetz (R-FL) took to Twitter exposing exactly how sick and twisted this is. (Continued Below)

Gatez wrote, “Democrats in the Judiciary Committee just voted against notifying ICE when an illegal alien fails a background check to buy a gun. They hate ICE so much that they’d keep ICE in the dark when illegals try to get guns!”

Democrats in the Judiciary Committee just voted against notifying ICE when an illegal alien fails a background check to buy a gun. They hate ICE so much that they'd keep ICE in the dark when illegals try to get guns! pic.twitter.com/WIkUDsW6FJ

Today I filed an amendment that requires anyone who fails a background check to be reported to law enforcement. Dems voted against it. This gun control bill isn’t about public safety. It’s about taking away the rights of law-abiding citizens.

"Just behind these doors, Democrats are trying to make it where it's hard for law-abiding citizens to be able to access their rights and protect themselves." – @NRA life member Rep @RepMattGaetz #HR8 #2A pic.twitter.com/G00YcKR3XZ

How does letting illegal immigrants get guns save lives? Democrats just used a procedural motion to prevent @ICEgov from finding out when an illegal immigrant tries to buy a firearm illegally. #HR8

This just in: According to Democrats, giving your gun to a police officer can make you a criminal. #HR8

Democrats’ latest move reveals they think gun ownership should be limited to rich elites, but Constitutional rights belong to all Americans. #HR8

Democrats have voted to cut off debate on #HR8 and amendments that would defend the vulnerable, protect liberties, and save lives.

It is truly blessing to have former Rep. @GabbyGiffords join us to introduce #HR8, the Bipartisan Background Checks Act of 2019, eight years after the Tucson shooting. https://t.co/ePopfptJV9

For more information about H.R. 8 and to watch the panel in its entirety visit the House Judiciary [HERE]