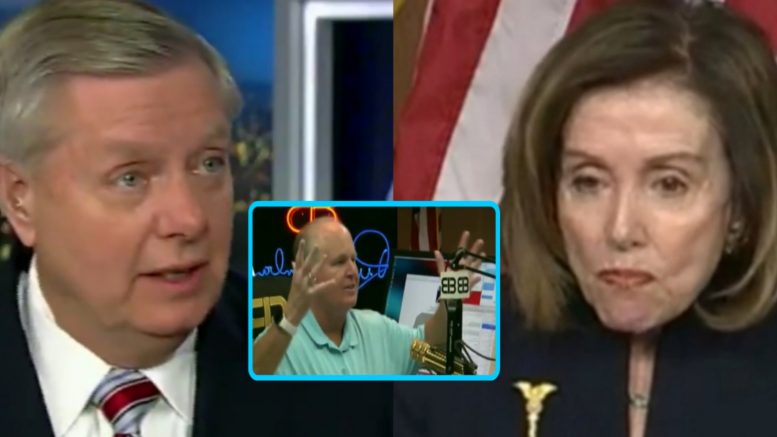 Lindsey Graham laid it down hard on Democrats in his usual, bold manner right before news began to circulate that President Trump is going to declare a national emergency along the southern border.

Graham tweeted a video showing his reaction on Fox News after they played a video for him of Rush Limbaugh sounding off on the topic of why Trump should declare a national emergency.

In the video, Rush is heard saying that declaring a national emergency would force Democrats to fight in the court system to try to stop Trump.

By doing so, Democrats would show their true colors on how they don’t have the security of Americans in their best interest.

Regarding Democrats going through the motions to stop Trump in courts, Rush pleaded, “Then all the better! Let the Democrats as often, as loudly as they can! They do not want border security.”

Graham responded to Rush by initially stating that although he doesn’t always agree with Limbaugh, in this case he thinks, “Rush is right.” Video Below

Graham then went on to say that there is money that Trump can get his hands on for purpose of securing the border without getting sued, but declaring a national emergency is a priority that also must be taken “because it is.”

He said, “Let the Democrats argue that it’s not (a national emergency), talk about not securing the border because we do. It’s a great issue for 2019 and 2020. It’s a legitimate national security issue.” Video Below

Graham then discussed how foolish it would be for Republicans to not be in full support of a national emergency.

He declared, “We would be idiots as Republicans not to support Donald Trump to build this wall any way he can legally, and he has the authority as President to declare a national emergency and there are monies available.”

Graham then doubled down, “We’d be stupid as a party not to stand behind him.”

There is money available to President @realDonaldTrump in the current budget to move around and help build the wall.

We’d be stupid as a party not to stand behind him. ….I can’t think of a better issue to define the Democrat and Republican Party than this.#BuildTheWall pic.twitter.com/drMnkIbCFp