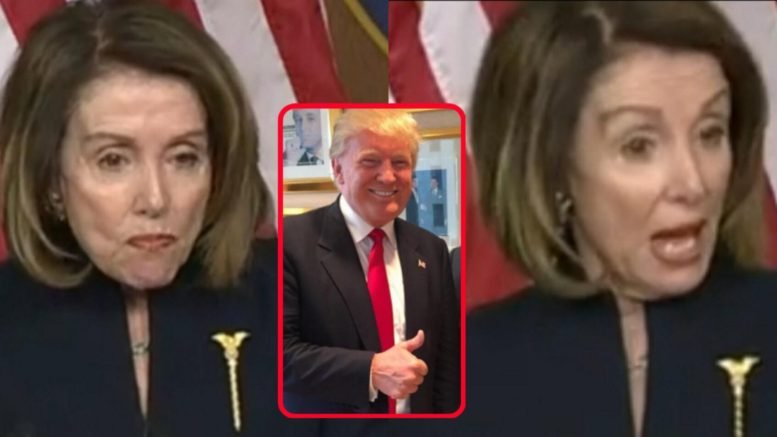 It’s the moment millions of Americans have been waiting for! The standoff between Republicans and Democrats may soon be over and then some!

Thursday afternoon, Senate Majority Leader Mitch McConnell (R-KY) faced his colleagues on the Senate floor and announced President Trump’s intentions with the new legislation that is expected to head to his desk after passing the Senate. (Video Below)

Mitch McConnell said he had an opportunity to speak with President Trump and then revealed what was discussed.

Speaker Nancy Pelosi (D-CA) gave a short briefing immediately after the news broke, and her reaction speaks volumes. (Video Below)

When she was asked by the press if she plans to file a legal challenge after the President declares a national emergency, she responded to the bias press and asked, “Did I say I was filing a legal challenge? I may… that’s an option.”

She went on to explain that she will review her options and then began trashing the President when realizing she just got Trumped!

“It’s not an emergency, first of all, what’s happening at the border. It’s a humanitarian challenge to us.” She said while clearly being in denial and trying to defend her crooked party in front of the press. (Video Below)

Pelosi was at a loss for words and realized President Trump won this fight for the American people.

Instead of being happy that America will be protected and safe, she tried to turn the subject to gun violence. Bitter and seething through her teeth she asked, “Why don’t you declare that an emergency, Mr. President?”

(Related: Four Lawmakers Send Urgent Letter To Trump Regarding The Southern Border: ‘Immediately Use Your Authority’)

Statement on the Government Funding Bill from White House press secretary Sarah Sanders and video below:

(Related: Huckabee Zaps Pelosi With A Reality Check After Rejecting Trump’s Offer: ‘She Is Not Equal To The President’)