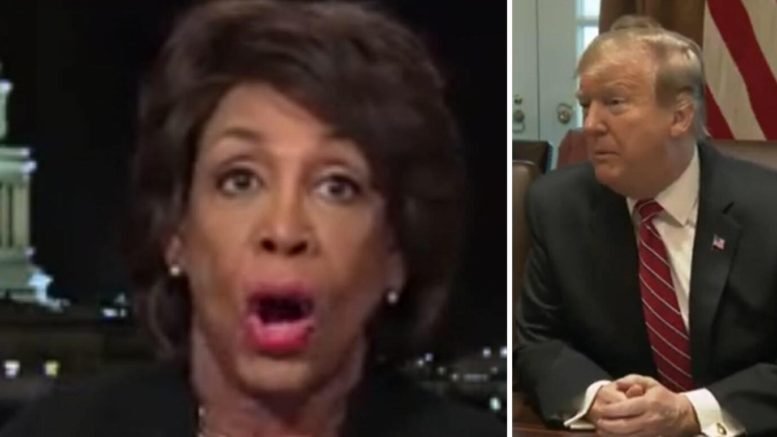 Rep. Maxine Waters (D-CA) is at it again, and this time she is urging people to protest across the country against the President.

Waters joined MSNBC’s “All In” on Friday after President Trump declared a nation emergency for the U.S. southern border. (Video Below)

Rep. Maxine Waters is mad that President Trump has executive power and called his declaration of a national emergency “fake.”

“I really expect we’re going to have a growing number of Republicans that are going to join with us in this disapproval.” Waters claimed.

After hoping that Republicans will join forces with her, she next trashed the President and his supporters.

“You know I’ve been talking about impeachment for a long time. I’m absolutely stunned and amazed that the American people have taken so much off of this President.” She whined. (Video Below)

Maxine continued her complaining, “This President has lied. I think it’s been documented, 8,000 times in the last two years. This President has committed obstruction of justice right before our very eyes. And if we could ever get Manafort to tell the truth, then we will find they conspired to get Trump elected so that sanctions could be lifted off of Russia.”

“The Americans have taken too much off of this President. He is dishonorable. He does not deserve to be President of the United States. As a matter of fact, he loves Putin, dictators, loves Kim Jong-un, talking about they’re in love now.” She moaned.

Then Maxine added, “And so it’s time for everybody to stand up. All hands on deck to refuse this President, these fake emergency powers that he would like the have. And so, I’m urging everybody get together, rally in every community across this country all this weekend, send a message to Washington, D.C., ‘No, Mr. President, we’re not going allow you to do this.” (Video Below)

(Related: Rudy Just Sent A Terrifying Warning To Maxine That Will Shut Her Mouth For Good)