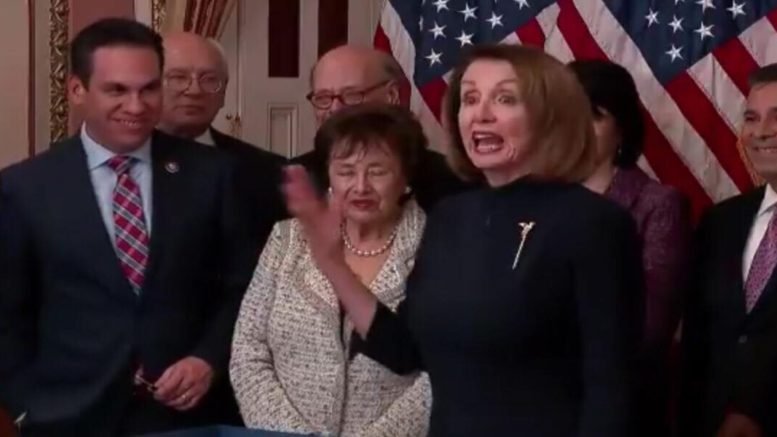 President Trump even recognized this, which explains why he put his support behind her bid as Speaker of the House and offered her Republican votes if needed. He tweeted in November, “I can get Nancy Pelosi as many votes as she wants in order for her to be Speaker of the House. She deserves this victory, she has earned it.” (Video Below)

Since taking Speaker, Pelosi has shown she still has a fight left in her, but her fight is no match with President Trump’s wits and his sharpness.

On Thursday, the House voted to pass a compromise bill on border security hours after the Senate overwhelmingly approved it. President Trump signed the bill and declared a national emergency on Friday, to strengthen border security beyond the funding provided in the bill.

However, after the signing on Valentine’s Day, Pelosi addressed the crowd of reporters and politicians on Capitol Hill.

Apparently, she was so thankful to be signing a border security bill aimed at preventing a government shutdown that she wished everyone gathered a Happy Thanksgiving – on Valentine’s Day! (Video Below)

“We saluted our victory, or the victory for the American people, earlier with chocolate. Chocolate from California, I call it the champagne of chocolate.” She continued.

“So again, I wish you all a Happy Thanksgiving. You should go home now to your loved ones,” She declared. (Video Below)

We wonder why the media didn’t blast this across the airwaves.

Speaker Pelosi must be so thankful for this funding bill she wished those gathered tonight "Happy Thanksgiving" pic.twitter.com/mNYm65QeVI