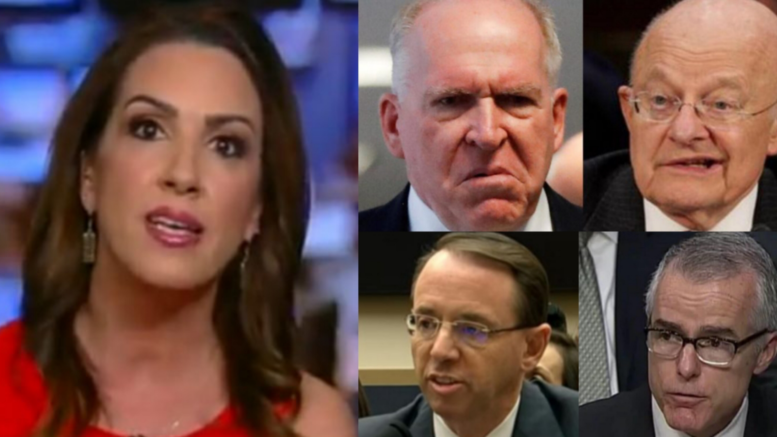 Andrew McCabe and Rod Rosenstein have been among the primary subjects of political chatter over the past 48 hours, amid the release of excerpts from McCabe’s new book.

McCabe confirmed in his book that there were discussions among top brass at the FBI and DOJ on using the 25th Amendment to oust President Trump. Rosenstein is alleged by McCabe to have suggested that option and volunteered to wear a wire to tape conversations with the President.

Although it’s tough to believe everything that comes from McCabe, analysts are now saying that his revelation basically gives more confirmation that secret meetings did occur among top former Obama officials to plan out a “white coup” against President Trump.

Investigative reporter, Sara Carter, touched on this subject in a recent appearance on Hannity.

She began by saying, “We now know senior Obama officials, including McCabe, Rosenstein, I believe, John Brennan, Clapper and others have trampled on the Constitution.”

Carter said former Obama officials were all attempting a “white coup,” also known as a “silent coup,” and now she thinks it’s necessary for newly confirmed AG William Barr to investigate. Video Below

She added, “The DOJ needs to clean house and so does the FBI. This is one of the most egregious cases in modern history.”

Then when asked by Hannity how many people she thinks committed crimes, Carter replied, “I would say right now, at least a dozen. I think there will be about a dozen referrals. I think they will include Glenn Simpson too, other people at Fusion GPS and those who lied.” She nodded when Hannity asked if the referrals would include Bruce and Nellie Ohr. Video Below

The Deep State Exposed: – Last night on #Hannity with @seanhannity discussing the role of Andrew McCabe and others @FBI in A Plan To Remove @realDonaldTrump https://t.co/30JAszcx33 pic.twitter.com/JxpoqFlXef