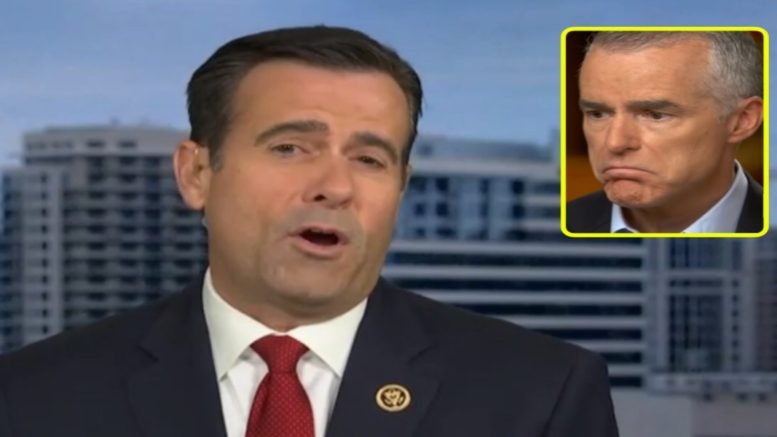 Ratcliffe disclosed what McCabe will discuss in his upcoming interview and his plot to remove President Trump from office. (Video Below)

After two years and 200 interviews, the Senate Intelligence Committee uncovered no direct evidence of a conspiracy between the Trump campaign and Russia, according to both Democrats and Republicans on the committee.

“The only person in Washington so far that says they have evidence of collusion between Donald Trump and the Trump campaign and Russia is Adam Schiff. Of course he says it’s neither direct evidence or circumstantial evidence, which are the only two types of evidence that exists in the law. So, we’ll wait on that.” Ratcliffe said.

He moved on to Andrew McCabe and explained, “he may be a disgraced former FBI agent who’s been criminally referred for lying, but he’s gonna make at least one truthful statement in this interview tonight.”

Ratcliffe pointed out that many have been saying for the last year that senior leaders of the FBI and DOJ have been secretly investigating President Trump and trying to remove him from office. (Video Below)

“Tonight, Andy McCabe will tell you, he and other senior leaders at the DOJ and the FBI were secretly investigating Donald Trump and trying to remove him from office.” Ratcliffe said.

“Once you get past that one truthful statement, the rest of his story frankly has bigger holes in it than the titanic.” He declared.

Further he added, “As a conspiracy starts to unravel, sometimes the co-conspirators turn on one another.” (Video Below)

Ratcliffe pointed out that one of the things McCabe will say in his interview on “60 Minutes” is that “he started the investigation when Jim Comey got fired on May 9th, because he believed that order may have come from Vladimir Putin, and Donald Trump was acting as an agent of the Russian government and carrying out that order.”

(Related: Rush Unloads On The ‘Silent Coup’ Against Trump: ‘These Guys Oughta Be The Ones In Jail’)

“So you have all of these things that were taking place, and again, it underscores the point that there were senior officials at the Department of Justice, that were the same officials that had undermined and prejudged Hillary Clinton as innocent– prejudged Donald Trump as guilty. And they were the ones making the decisions in these investigations.” The Texas congressman said.

Further he made clear that he hopes Attorney General Bill Barr will clean up the mess that occured in the DOJ and FBI during the 2016 presidential election and end the Mueller investigation.

(Related: Graham Puts His Foot Down, Vows To Investigate McCabe & Rosenstein: ‘[We’ll] Have A Hearing About Who’s Telling The Truth’)