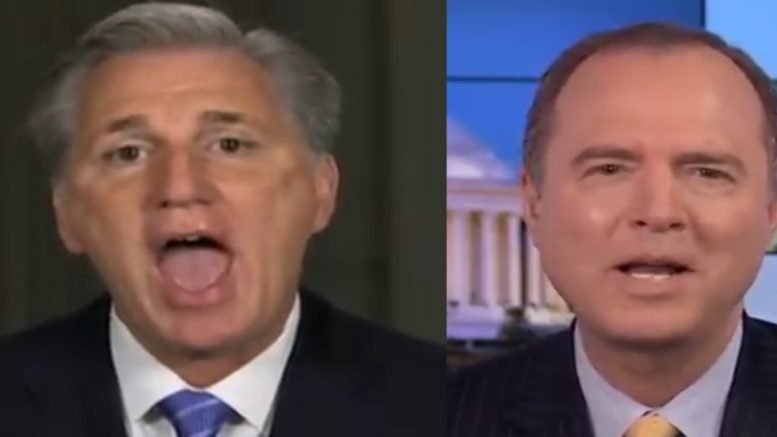 McCarthy last week, raised questions about Schiff meeting with Glenn Simpson, the co-founder of Fusion GPS that created the fake dossier. (Video Below)

During his interview with Maria, McCarthy explained the blog he wrote where he laid out serious questions pertaining to the secret meeting between Schiff and Simpson.

“First of all, what did they meet about?” McCarthy pointed out, “And this was after the committee wanted to look into Glenn Simpson even further, because of the credibility and answers he gave before he came to the committee.”

“Then, think about this: I want to know what did they talk about, how many other times have they met? But, why did Adam Schiff fight when we wanted to find out who paid Fusion GPS?” McCarthy announced, “Well we found out that it was the Democratic National Committee.”

Then, McCarthy asked, ” And why did Adam Schiff ask Glenn Simpson in the hearing ‘what should we investigate? Where should we go?’ Why is he taking direction from this individual that does not have credibility… that created a fake dossier?” (Video Below)

McCarthy went on to ask, “Adam Schiff, who is now the Chairman, why doesn’t he hold himself to the same standards that he asked Jeff Sessions and Devin Nunes?”

“He should recuse himself based upon meeting with an individual that we’re looking at who created the [dossier] from Fusion GPS and not even telling us!” McCarthy declared.

“In that part, the bias moving forward, he should recuse himself from any future investigation or being the chairman!” He added. (Video Below)

I completely agree with @GOPLeader.

The American people would be well-served if Chairman Schiff answered a few questions on his interactions with Fusion GPS founder Glenn Simpson. https://t.co/oqYHwjB56l