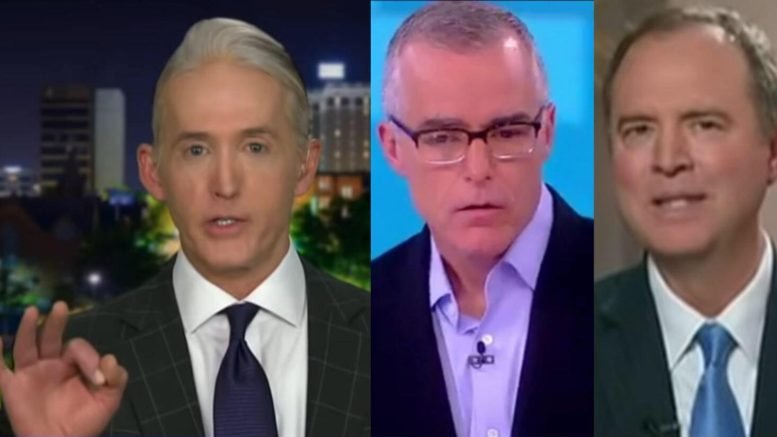 Gowdy weighed in on former acting FBI director Andrew McCabe and Adam Schiff’s claims of having Russian evidence. (Video Below)

Andrew McCabe interviewed on NBC’s “Today” show Tuesday morning, and he said no members of the “Gang of Eight,” a bipartisan group of House and Senate leaders, including Nunes and Ryan, objected to the investigation.

“The reason he’s doing it this way is that [Rep. Devin Nunes, R-CA] and [former House Speaker Paul Ryan, R-WI] are not allowed to discuss anything that’s said in a ‘Gang of Eight’ meeting and McCabe knows that. So he can level the accusation and Devin and Paul cannot refute him.” Gowdy explained. (Video Below)

Gowdy said he believed McCabe wasn’t telling the truth and that Nunes and Ryan did not know about a second investigation.

“There were three investigations into a duly elected president. The Peter Strzok one from July of 2016 and then McCabe started a counterintelligence [probe] and if he’s telling the truth, started a criminal probe into the president of the United States,” Gowdy said.

“I listened to Devin and Paul quiz the [Justice Department] and the FBI for hours on multiple occasions about the one counterintelligence investigation, we all knew about it. I find it stunning that they would know about a second one and not say a single solitary word. And I will continue to not believe they knew about it, unless one or the other contradicts it.” He added. (Video Below)

Gowdy also addressed former FBI Director James Comey’s May 2017 firing and McCabe’s belief that the president was trying to shut down the Russia investigation.

“If thinking that Jim Comey is not a good FBI director is tantamount to being an agent of Russia then just list all the people that are agents of Russia. Chuck Schumer, Nancy Pelosi, Rod Rosenstein who wrote the memo getting rid of Comey, Michael Horowitz who’s the Inspector General.” Gowdy said.

“I know Mccabe liked Jim Comey, but lots of people thought that Jim Comey lost the ability to lead that department. And the fact that President Trump got rid of him in May 2017, is not sufficient basis to launch a criminal obstruction of justice probe!” Gowdy declared.

Next, Martha brought up Adam Schiff, who believes McCabes claim that “the President was a national security concern.”

Adam Schiff said Sunday on CNN, “You can see evidence in plain sight on the issue of collusion in pretty plain sight, pretty compelling evidence.”

Gowdy squashed Schiff and said, “Well collusion is a synonym for conspiracy. So, I hope the questionnaire would’ve followed up and said, ‘okay, chairman Schiff, you have just said you have evidence of a criminal conspiracy between the President of the United States and the Russian state. What is that evidence? What is the crime? Was Trump involved in the hacking of the DNC server? Was he involved in the hacking of John Podesta’s email? Are you alleging that he participated in  deciding when to disseminate those proceeds of those two hacks?'”

Gowdy continued, “I have heard Adam on a number of occasions say that he is the third eye raven that he has evidence and has seen things that no one else has ever seen before, but I’ve never heard him ask what is it? What is the evidence of crime that you have chairman schiff? I’ve never heard it followed up on.”