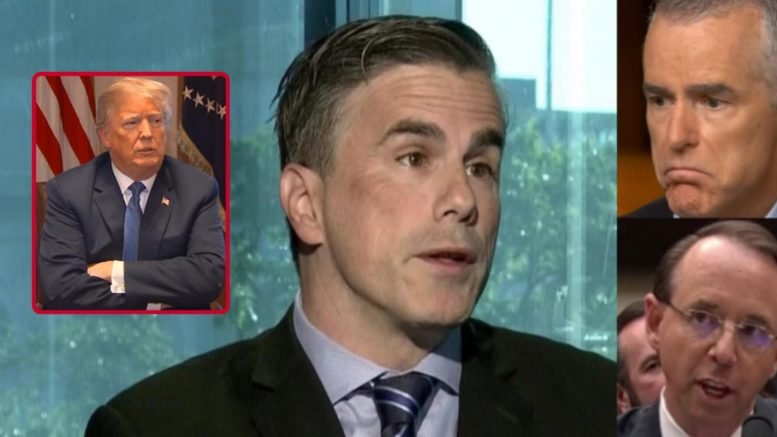 America’s favorite watchdog, President of Judicial Watch, Tom Fitton released a new breaking press release informing everyone that they are suing for ‘Coup’ documents from the FBI and DOJ.

This comes amid the former acting FBI Director Andrew McCabe, and top DOJ officials that considered asking cabinet members to invoke the 25th Amendment in order to remove President Trump and discussed recording meetings with him. (Video Below)

According to a Tuesday press release from Judicial Watch:

The suit was filed after the Justice Department failed to respond to three separate FOIA requests dated September 21, 2018 (Judicial Watch v. U.S. Department of Justice (No. 1:19-cv-00388)). The lawsuit seeks all written and audio/visual records of any FBI/DOJ discussions regarding the 25th Amendment and plans to secretly record President Trump in the Oval Office.

On February 14, 2019, former acting FBI Director Andrew McCabe stated in an interview with CBS that “there were conversations about the possibility of removing Trump under the 25th Amendment and confirming that Deputy Attorney General Rod Rosenstein had offered to wear a wire around the president.” (Video Below)

It was reported in September 2018 that Deputy Attorney General, Rod J. Rosenstein, suggested that he secretly record President Trump in the White House in an effort to invoke the 25th Amendment and have President Trump removed. Judicial Watch said their immediate follow-up FOIA requests were ignored.

President Trump wrote on Twitter Monday, “The biggest abuse of power and corruption scandal in our history, and it’s much worse than we thought. Andrew McCabe (FBI) admitted to plotting a coup (government overthrow) when he was serving in the FBI, before he was fired for lying & leaking.” (Video Below)

“It is no surprise that we are facing an immense cover-up of senior FBI and DOJ leadership discussions to pursue a seditious coup against President Trump. This effort to overthrow President Trump is a fundamental threat to our constitutional republic so Judicial Watch will do everything it can in the courts to expose everything possible about this lawlessness.” The Judicial Watch President said.

Tom Fitton further explained, “It looks like there was a seditious orchestry at top FBI and DOJ officials that sought the removal of office of President Trump. They not only sought to overthrow the President, but even secretly record him in the oval office. This is an attack on our Republic and Judicial Watch will do everything it can in Federal court to get the truth about this assault on our representative democracy.”

Fitton made his New Year’s Resolution loud and clear and the Deep State should be shaken to the bone, because at the top of his list, Fitton announced, “Resolution: Sue the Deep State, more.”

So when Tom Fitton resolved to sue the Deep State and more, it seems they are going to need more than a boat or an oar to get out of the swamp.

This effort to overthrow President @RealDonaldTrump is a fundamental threat to our constitutional republic so @JudicialWatch will do everything it can in the courts to expose everything possible about this lawlessness. https://t.co/X5Qzy5I4ey pic.twitter.com/uT4CfssuIK