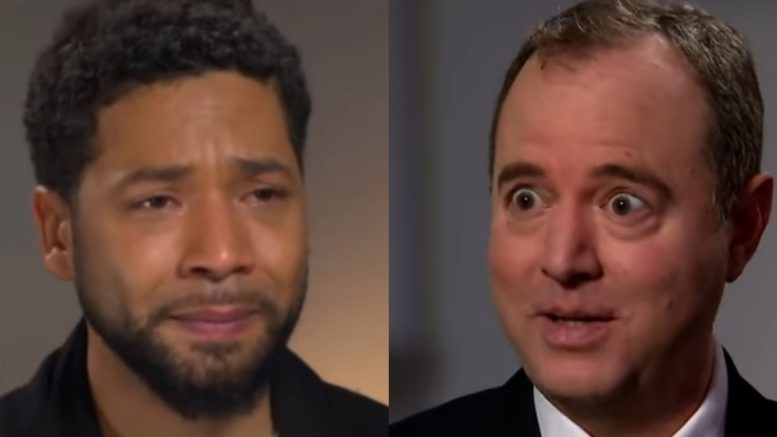 Rep. Adam Schiff (D-CA) got caught doing some major backpedaling, or shall we say tweet-deleting, on Wednesday evening right around the same time it was announced that charges were approved in the Jussie Smollett case.

Smollett is currently facing serious legal jeopardy for allegedly filing a false police report in relation to “orchestrating a hoax hate crime,” according to The Daily Caller.

After the apparent fake attack occurred in January, Schiff tweeted out a picture of him and Smollett at a pride parade in LA.

The picture was captioned, “I met @JussieSmollett at the Pride Parade in Los Angeles, and I’ve seen the passion and moral clarity of his activism first hand. This week he was the victim of an horrific attack. We pray for your speedy recovery, Jussie, and reject this act of hatred and bigotry.”

Schiff attempted to delete this tweet without notice as it was announced that a state attorney approved charges against Smollett. However, it was too late as Ryan Saavedra, a reporter from Daily Wire, already had screen shot of Schiff’s tweet in his possession and blasted it for the whole world to see.

Saavreda tweeted his screenshot and wrote, “Hey @AdamSchiff Why did you just delete this tweet?” See Below

Whoa! Schiff got CALLED OUT!

This latest twist of events is definitely not good for Schiff, who was also recently connected to major Democrat donor, Ed Buck. Buck had a male escort die at his home, and it was the second male escort to die at his residence in less than two years.

Schiff was called out by conservative actor James Woods, who tweeted the following picture of Schiff with Buck:

Hey @AdamSchiff, are you going to stand by your dear friend and donor, Ed Buck, now that another dead guy ended up in his love pad? pic.twitter.com/8CT2KPLrGK

Look for other Democrats to follow Schiff’s lead and back pedal their support for Smollett in coming days, including Presidential hopefuls Kamala Harris and Cory Booker, who have both spoken out on the case.

We leave you with Michelle Malkin’s reaction to the latest on Smollett.

"Frauds are everywhere y'all." True. Dat.