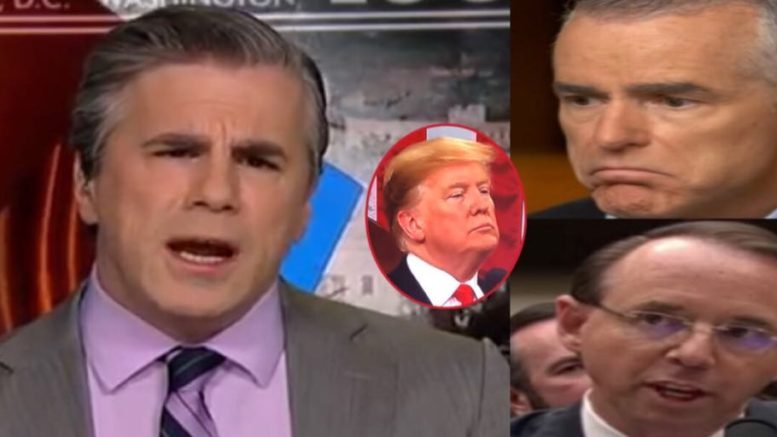 Fitton weighed in on how former FBI Director Andrew McCabe discussed invoking the 25th Amendment with Deputy Attorney General Rod Rosenstein and further exposed the problems at the Department of Justice and the FBI. (Video Below)

“Andy McCabe’s interview last night only furthered what anyone who has been truly investigating already knew: senior Intel officials were bent on retaliating against President Trump for personal reasons, and they were willing to throw out any rule or break any protocol to do it.” Mark Meadows wrote on Twitter Monday.

Tom Fitton, during his interview said, “Well it’s extraordinary. It confirms early reports last year that this discussion took place. You know Lou, if there were Generals or Kernels in the Pentagon talking like this, there [would] be no doubt the media would be calling it a coup. But because, you have unelected bureaucrats and appointed officials talking like this, and it’s the target — President Trump, they don’t care.”

Fitton warned, “Americans should realize this how you can lose a Republic– where you have appointees of a President and bureaucrats who virtually answer to no one, talk about manipulating the law in order to overturn a Presidential election, and attack a President they don’t like.

He added, “And they don’t like [Trump] for any substantial reason, they don’t like him because he fired his buddy– McCabes buddy and Rosenstein’s buddy,, James Comey.” (Video Below)

Fitton explained this was a fight about a personnel decision and decided that they wanted to overthrow the Presidency. “Let’s be clear here: Mueller is a successor to this coup attempt. The appointment flows out of all these discussions, and we should recognize that the effort to overthrow the President is continuing with the Justice Department help through this out of control Mueller investigation.” Fitton said.

Then Dobbs declared, “This is outrageous! And we haven’t heard a word from leadership of the Republican party about arresting these people. We haven’t heard a word from the so-called establishment that is supposed to hold the tenants and values of this great nation in primacy. They are just simply averting their eyes. It’s appalling, it’s disgusting. There should be outrage throughout this country, in both parties, across every part of this nation.” (Video Below)

Fitton agreed with Dobbs, and he laid out the problems within the Justice Department.

Then, he laid down the hammer and demanded, “Attorney General Barr needs to step up and defend the President!”

Fitton asked, “You know the argument against Barr was ‘will he stand up to the President’?

Fitton disagreed with that logic and expressed, “I think the test for Attorney General Barr is ‘will he stand up for President Trump’ and for the rule of law against these deep staters and the establishment who don’t care about our constitution?”

Americas watchdog further added that the current problem with the FBI is that Christopher Wray has zero interest in reforming the organization. “He’s missing in action when standing and uncovering the corruption; he’s been excusing the corruption!” Fitton said.