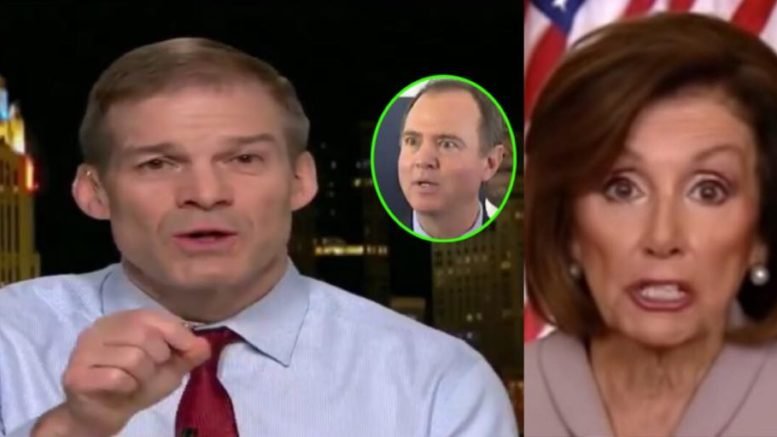 Schiff has currently been in the hot seat since evidence surfaced of his “secret meeting” with Glenn Simpson in Aspen, Colorado. (Video Below)

Lou Dobbs began by asking Rep. Jordan about Adam Schiff’s intentions of pursuing his own investigations into President Trump regardless of Robert Mueller’s findings.

Jordan responded, “My main concern with Chairman Schiff right now is that fact that two years ago he called for Devin Nunes to step down and step aside for Chairman. And now, we learned a few weeks ago that, Adam Schiff was meeting with Glenn Simpson in Colorado.”

Jordan wondered why we are not hearing anything from Democrats or the Speaker of the House about Schiff’s “secret meeting”, and why are they not calling for him to step down? “It’s hypocritical to me.” He said.

“Understand what took place here, Lou: Adam Schiff, last summer met with Glenn Simpson in Colorado. Glenn Simpson, [is] the very guy that was paid by the Clintons to put together the Dossier.” Jordan explained. (Video Below)

Then Jordan revealed, “And here’s another important point about that: at the time we discovered the Clintons were paying Glenn Simpson to put together this dirty Dossier, Adam Schiff tried to ‘block Congress’ from getting that information.”

During that time, Devin Nunes threatened to subpoena Fusion GPS’ bank records. Then, a judge denied Fusion GPS’ request for an injunction blocking the House Intel committee from subpoenaing a bank for records about Fusion’s financial transactions.

“Because I find all of Fusion’s objections to the subpoena to be unavailing” the motion was denied, wrote Leon, an appointee of former President George W. Bush. (Video Below)

“It was that action by Devin Nunes, which ultimately gave us those bank records. The Clintons were in fact, paying Fusion GPS to go put this Dossier together. That is serious stuff, and so, that is my main concern with Chairman Schiff,” Jordan continued.

Dobbs asked Jordan point blank if Schiff should recuse himself.

“That’s a decision by Speaker of the House and the Intelligence Committee.” Jordan replied.

Then, Jordan laid down the facts: “Understand this: you had the Clintons pay the law firm Perkins Coie, who hired Glenn Simpson, who went and hired a foreigner — Christopher Steele, who then put this Dossier together.”

(Related: McCarthy Hits Schiff With A Recusal Demand: ‘The Bias Of What’s Going Forward, He Should Recuse Himself’)

“The idea that the Chairman of the Intelligence Committee is meeting with the very guy, hiring a foreigner to put the Dossier together– which as you said, was the basis for getting the FISA warrant to spy on the Trump campaign– that is serious. So, I think, it’s a pretty important question for the Speaker of the House to raise with Chairman Schiff.” Jordan suggested.

#DeepStateCorruption – @Jim_Jordan: My main concern with Adam Schiff is that he met with Glenn Simpson in Colorado last summer. Simpson is the very guy who was paid by the Clintons to put together anti-Trump dossier. #MAGA #TrumpTrain #Dobbs pic.twitter.com/Mpb5dFVw6i